Only a few months left now to finish my interviews!  I have been so lucky to have such a varied amount of people speak to me about what they’re passionate about.  I have learnt so much about possible careers!  This month I am speaking to Eric Mumper who works out of Ohio State University.

How long have you been a Geomicrobiologist? Please tell us about the field of study you specialise in?

I’ve been a geomicrobiologist for about seven years.   Geomicrobiology deals with the intersection between geology and microbiology.  I like to tell people that I work with microbes that eat, breathe, and make minerals.  You and I breathe in oxygen and our bodies convert that O2 to CO2 in a process called respiration.  There are microbes which respire by a similar process with elements like iron or magnesium.

The bacteria* I work with produce very tiny magnets which are about 1/1000th the width of a human hair.  While you might think that magnet-producing bacteria are exotic, they’re actually quite common.  No matter where on the planet you live, if you go to a nearby pond or stream and scoop up some mud, you’ve probably also scooped up millions of these magnetic bacteria.

All around us, unseen every day, billions upon billions of microscopic organisms make imperceptible changes to things such as iron, nitrogen, magnesium, and other elements that have a huge impact on the cycles of elements all over the planet.  To borrow a phrase from E. O. Wilson, these are the “little things that run the world”. 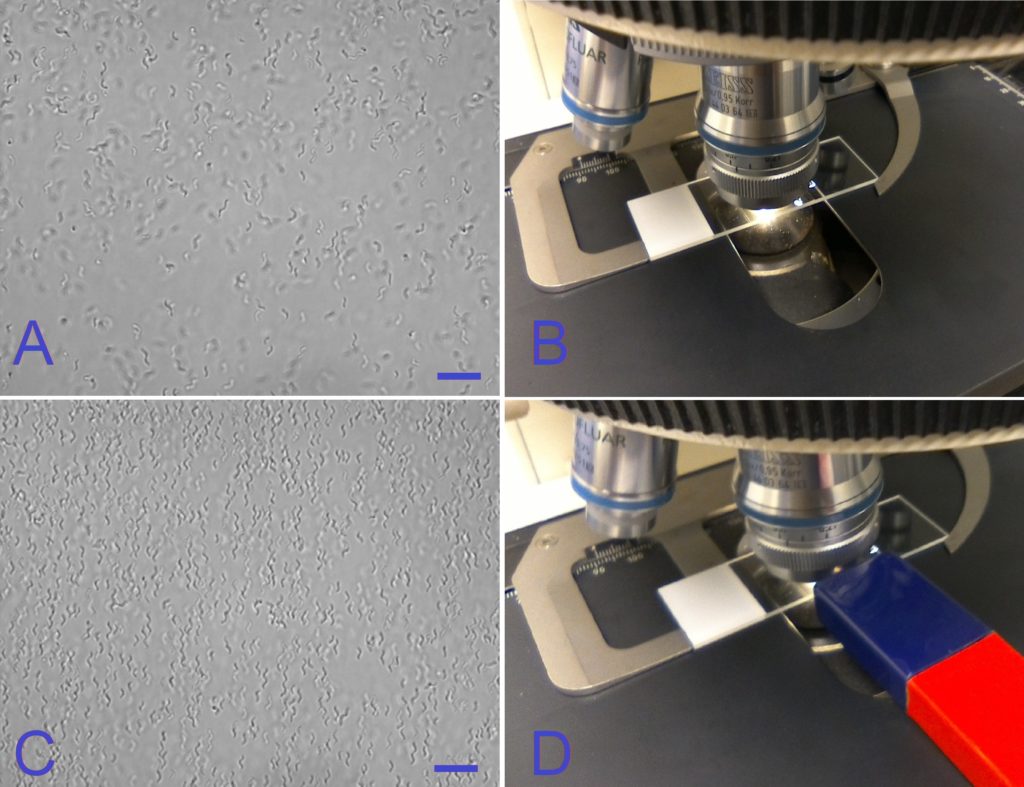 The first picture shows my bacteria. The scalebar is 10 micrometers. Panel A are the cells swimming in their usual, random movement because there is no magnetic field applied (panel B ). Panel C shows the cells aligned with the external magnetic field created by the bar magnet (panel D)

Why did you pick this particular field of study?

I read a book called The Third Domain by Tim Friend.   From the book, I was introduced to a strange world in which microbes lived in boiling water or in acid.   In this world, microbes are devouring the entire Titanic, producing fossil fuels like methane, and helping us refine gold and other metals.  It might seem like science fiction, but it’s not.  We’re constantly making new discoveries about micro-organisms that are living in places they shouldn’t be living, eating things they shouldn’t be eating, and involved in geochemical systems in which we didn’t think they’d be involved.  These organisms have all sorts of applications for us humans as well.  They make molecule-wide conductive nanowires, eat pollution and radioactivity, produce metals, and can even turn CO2 into inert substances like chalk.

What did you want to be when you were younger?

I bounced around on a lot of “career” ideas as a kid: from garbage collector, to minister, history professor.  However, I distinctly remember a conversation I had with my high school science teacher in which I pointed out that the garbage we throw away still has a lot of chemical energy left in it.   If we could somehow access that energy, we could reduce waste and generate electricity.   Geomicrobiologists are very interested in micro-organisms that can turn things like garbage into useful things.  I think I was on a collision course with this type of science at that point.

Why would you suggest this as a job for me?

In this job, you get to learn about something new every day.   We’re constantly making new discoveries about life growing in weird places or strange ways in which micro-organisms make a metabolic living.  On top of that, this field gets into a little bit of everything.   I’m currently working with some biophysicists who are mostly interested in piloting my bacteria around by using external magnetic fields and video game controllers.  Other people in this field are more interested in astrobiology, paleontology, engineering, or genetics.  You could put a dozen geomicrobiologists in a room and they’d probably look at the same organism a dozen different ways.

What qualifications did you need?  Where did you study?

To be a geomicrobiologist, I’d suggest a degree in either geology, microbiology, or chemistry.  You could probably make a decent argument that a degree in statistics, genetics, environmental sciences, engineering, or even physics would be helpful.   Geomicrobiology is still a relatively new field and doesn’t have a lot of dedicated degree programs. At the end of the day, it all comes down to what aspect of the microbes interest you.  I’m a geologist/microbiologist by training and I work with biochemists and physicists.

As an undergraduate at Ohio Wesleyan University, I studied geology and biology.  As a graduate student at Ohio State University, I took courses in geology, microbiology, and biochemistry.

Who would be your hero?  Who would you be excited to meet in your field?

Charles Darwin is definitely my hero.  He obviously wasn’t a geomicrobiologist, but he was a geologist and a biologist.  His ability to see the big picture and connect the dots in order to make sense of the “mess” of nature informs a lot of how I approach science.  Darwin didn’t specialize inasmuch as he learned about everything that he could.  From earthworms to atolls, every part of the natural world interested him.

I’d really like to meet Kurt Konhauser.  He wrote a textbook on geomicrobiology that I purchased as an undergraduate which I’ve read many times.

What has been the “best day” at your job?

In December of 2018, I travelled to Washington, D.C., to present the results of my PhD thesis in a session that was all about magnetotactic bacteria.   The audience included some of the major names in the field and I was presenting some pretty crazy ideas about why these bacteria make their magnets.   It went well, though, and one researcher even congratulated me for my findings in front of the entire audience.   It was very rewarding to see my hard work come to fruition.

How did you end up working in your current role?

My current role is, hopefully, just a temporary step in between graduate school and more permanent employment.  At the moment, I’m an adjunct (part-time) faculty at Ohio State University.

What is coming up next for you?

I hope to publish my PhD research by the end of the year and to hopefully find a full-time position somewhere.  I really enjoy doing research and teaching, so I’d like to stay in academia.   I’m also hoping to start a YouTube channel on which I’ll cover science from a more microbiologic perspective than a lot of the other science channels currently do.

Please tell us anything else you wish to share or add questions that you feel would be beneficial.  The type of people who read this vlog/blog are parents of pre-teens and teenagers and of course the pre-teens and teenagers, so if you have something of interest to share that would encourage the kids to look at your field of study we would love to show it here.

One question I usually get asked is: why do bacteria make magnets?   This is a really good question because we might not think about magnets as being made by living organisms.  Lots of different organisms make magnets. Birds, bees, fish, lobsters, whales, seals, and even some plants make magnets.  Even humans make magnets. With the exception of humans, in which this hasn’t been proven yet, it seems like all of these organisms use magnets to help them detect Earth’s magnetic field.  So do bacteria use their magnets to detect the magnetic field of Earth?  The answer is that we don’t know for certain.

There’s a current hypothesis that magnetotactic bacteria use their magnets to tell up from down when they’re swimming around.   If you’re the size of a bacterium, water molecules bumping into you have more force than gravity.    So the bacteria don’t “feel” down like you and I do.   Their magnets might help them use the geomagnetic field lines to guide their swimming.

My research suggests that they actually use their magnets to help them to harness energy that other bacteria can’t use.   The basic idea is that, when food is abundant, the magnetotactic bacteria spend their energy making magnets so that, when food is scarce, they can access energy their non-magnetic neighbors can’t.  We still have to gather more evidence to test this claim, but the results so far are pretty promising.