Last Friday I was at the San Diego Air & Space Museum. I was staying in San Diego for a week with my family and we were told by Jordan Evans the Deputy Director of Science and Engineering at the Jet Propulsion Laboratory to visit this amazing building. We were only staying locally to it, so within 15 minutes I arrived at the really impressive entrance! The two really large aircraft outside let your imagination soar straight away. 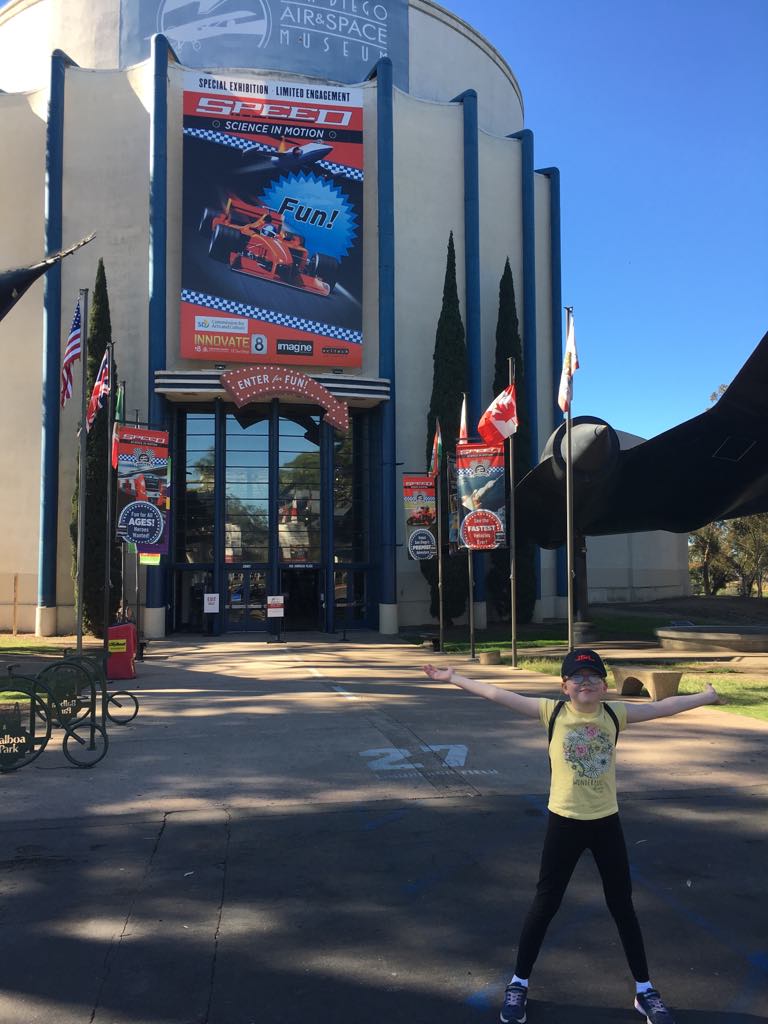 This is called the Ford Building, was built by the Ford Motor Company in 1935 for the California Pacific International Exposition. It was the Palace of Transportation in the 2nd year of the Exposition.

The first thing thing we came across when we went inside was the Apollo 9 Command Module and next was a sign on what it was and where to find the other Command Modules all over America and UK. 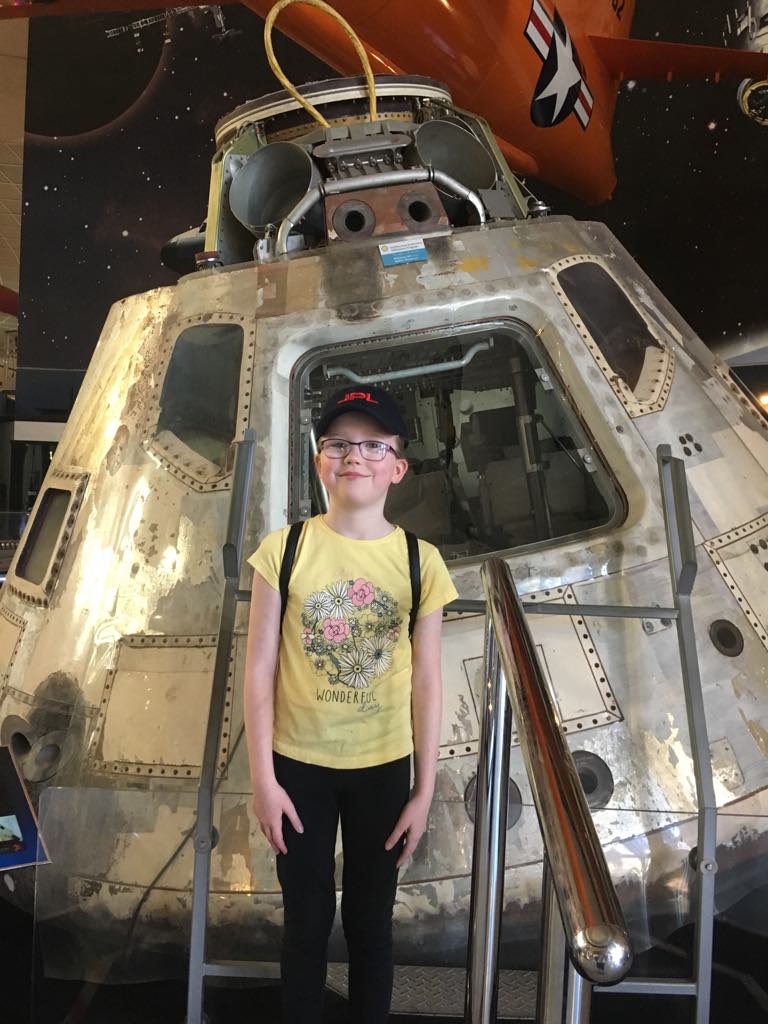 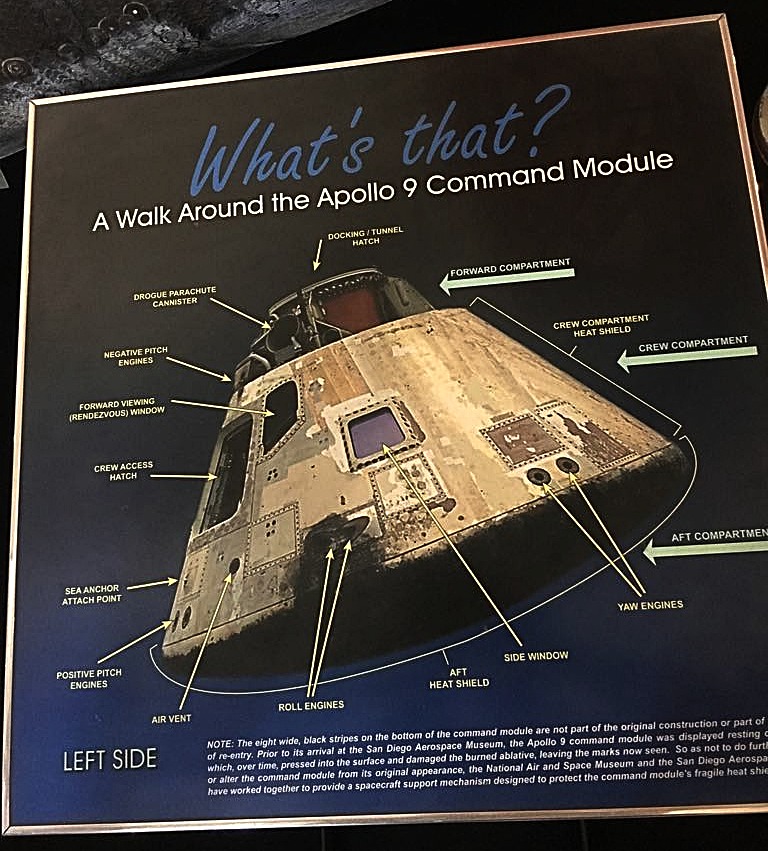 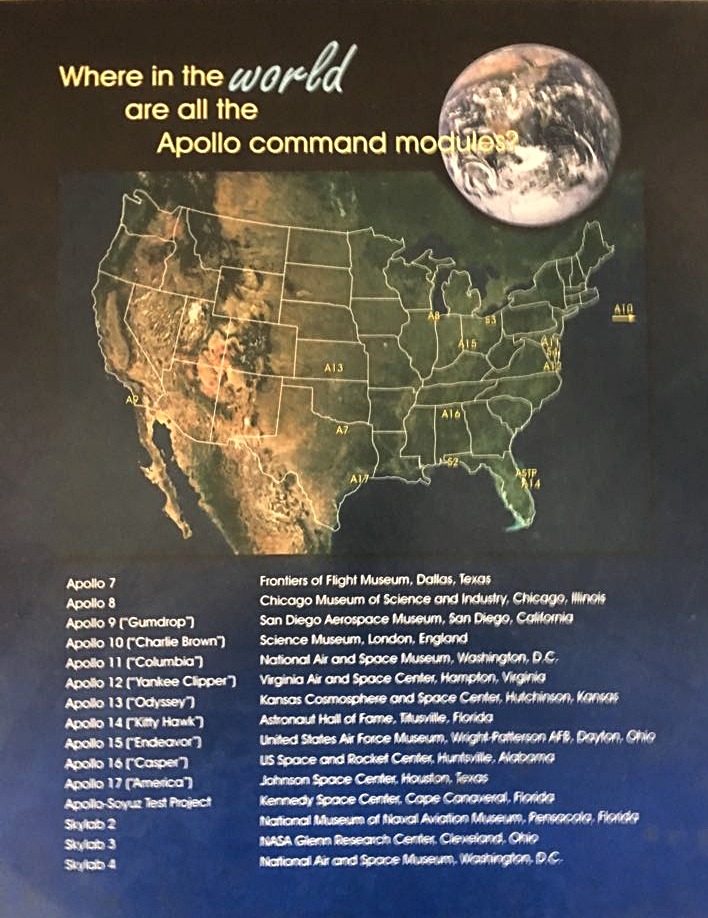 After going through the main entrance I saw a huge amount of painted pictures of all of the people who helped build and improve and fly aircraft and spacecraft through the years. I then walked into the main display area and started walking through aircraft built many years ago. They were so bright and colourful that they jumped out at you when you walked in and they were all to scale as well!

There were some people people called Docents who used to be in the Navy or the Army, etc and they were volunteers who gave up their time to be able to answer any questions you had about the aircraft around you. More about them later….

One of the exhibits I came across after looking at the planes was about all the women who have gone into Space before and Sally Ride was the third ever woman to go into space. However, she was the first and youngest American women to go into space at 32. 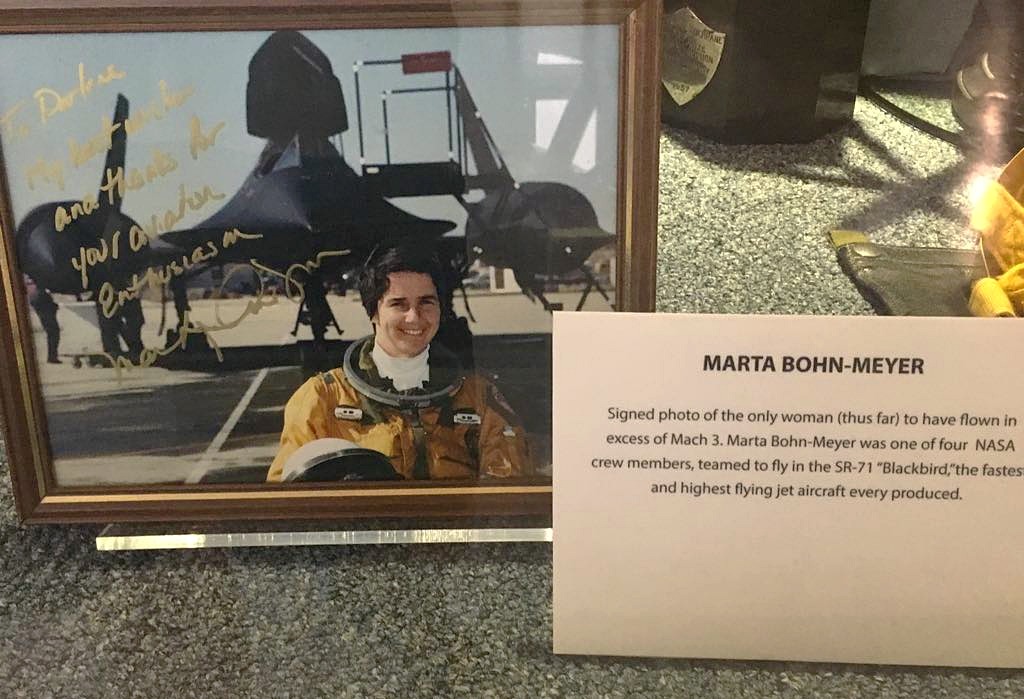 “Marta Bohn-Meyer (18 August 1957 – 18 September 2005) was an American pilot and engineer. Marta Bohn-Meyer served as chief engineer of the NASA Dryden Flight Research Center. Bohn-Meyer was involved in a variety of research projects at NASA — she was the first female crewmember assigned to the Lockheed SR-71, serving as navigator during studies of aerodynamics and propulsion that used the SR-71 as a testbed. She was also project manager in a study of advanced laminar flow wing design using the General Dynamics F-16XL aircraft.[1]” More details at Wikipedia.  They also have a really good education centre there for school children. They also run a really good young childrens area that they can explore in and try things. It was a bit young for me but I know the younger children would enjoy it. 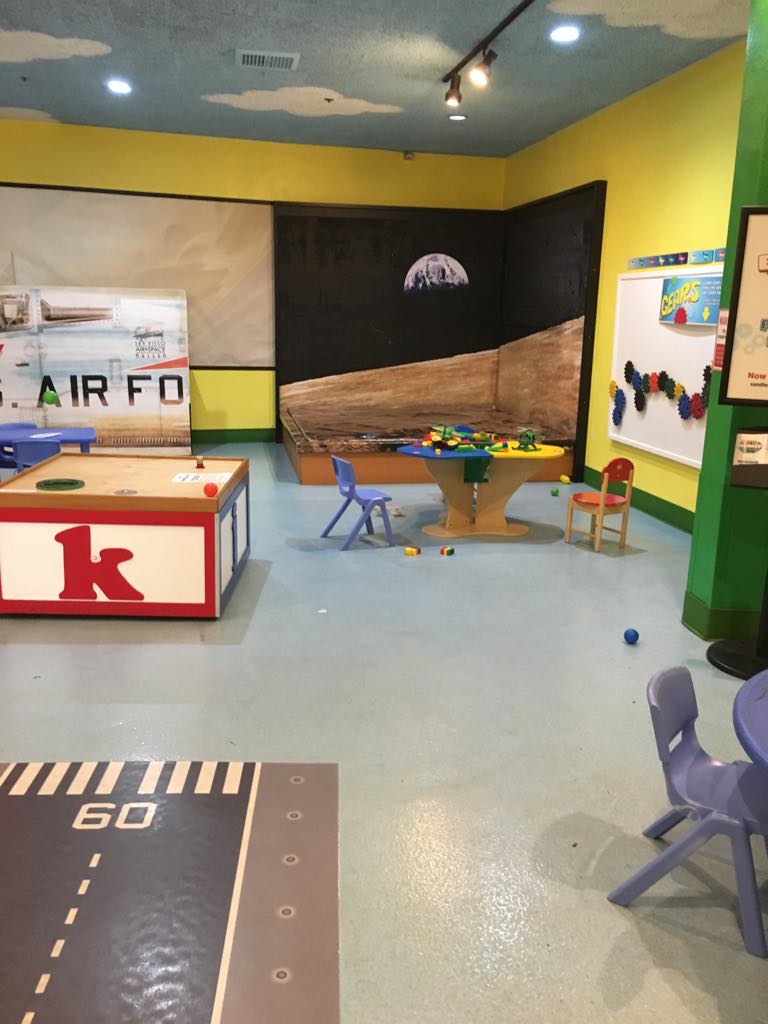 Then my Mum and I tried the 3D and 4D movies of which there was 3. They were called Frontier, The Secrets of Gravity and the Legend of Apollo They were all really good! Check out the two videos! I can highly recommend them! 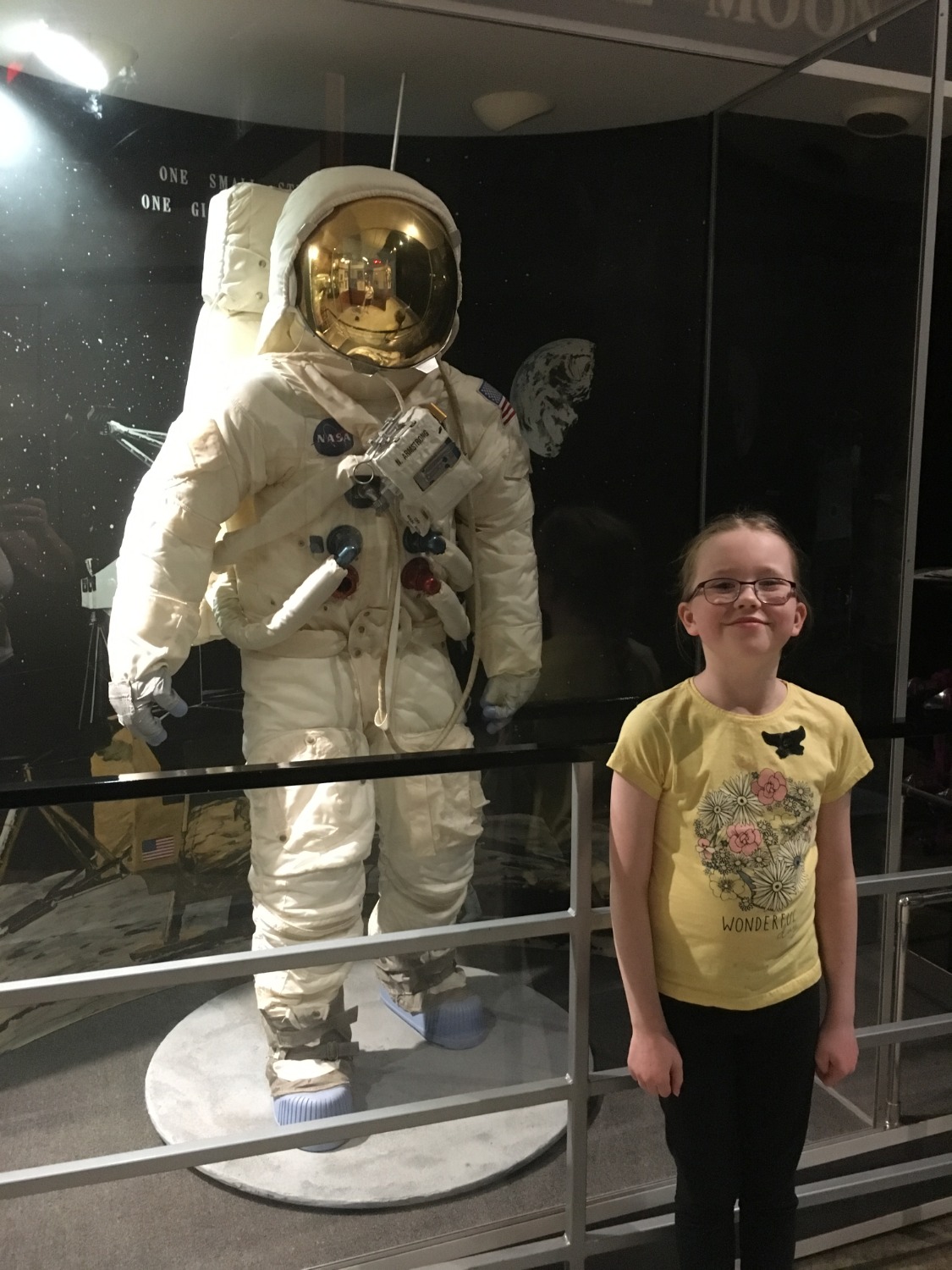 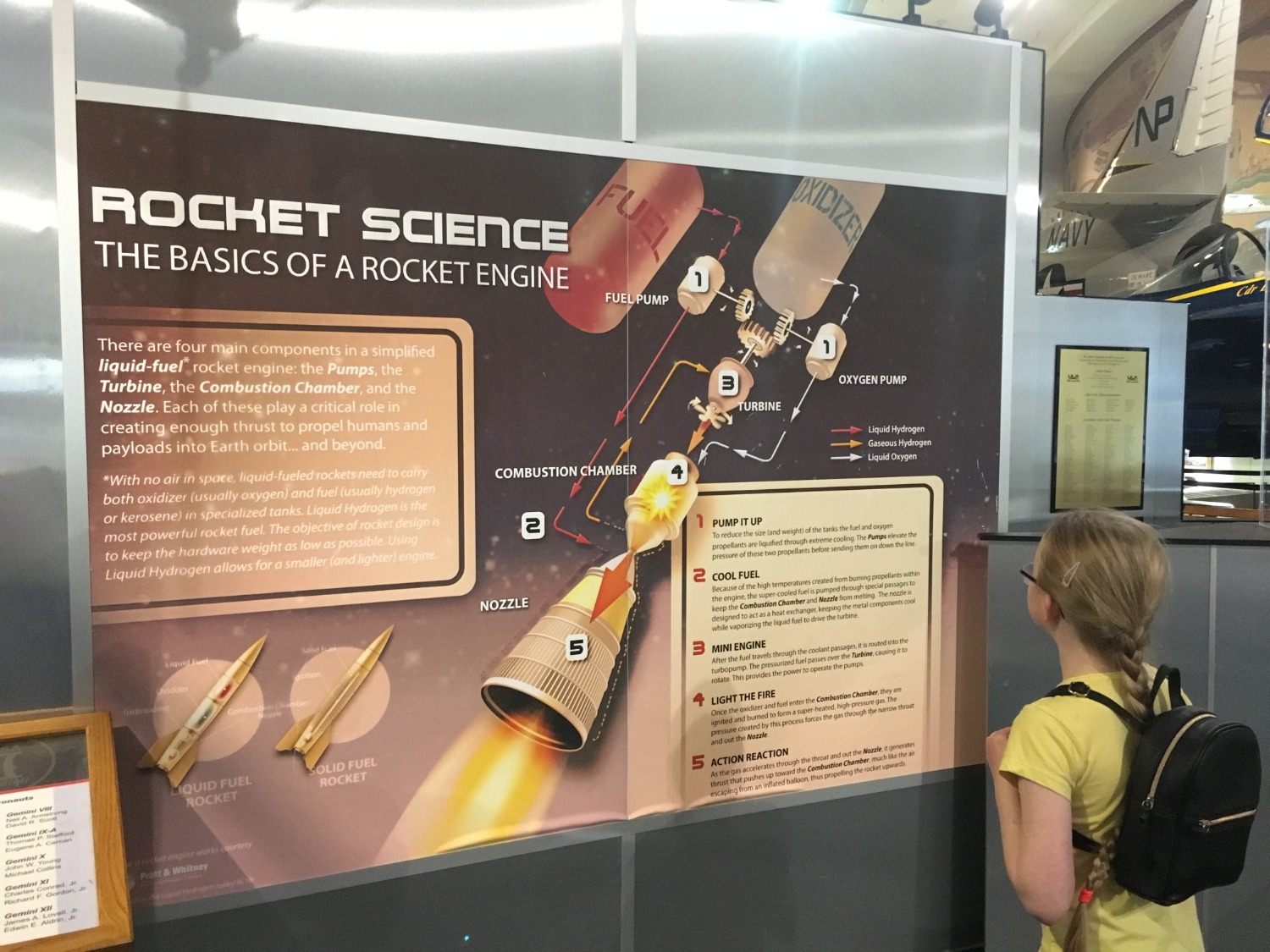 I did have a good look around the space section of the museum and read loads of the exhibits. We were coming close to the end of the visit when we got talking to one of the volunteers who showed us into the the 3D and 4D shows and they asked us how our trip was going? I mentioned I was writing this blog and the lady said that there was a whole other floor that we might be able to see if a Docent took us? So we walked over to a table where the Docents were sitting and we ended up speaking with Dr Mort Jorgensen who said he would be happy to show us around the basement!

He told me that all the aircraft and exhibits had been rebuilt and fixed over the years by the volunteers at their own speed downstairs and said we could visit it if we were interested. We said we would definitely be interested and he took us down the lift to the basement.One of the first things I saw was this metal (aluminium) aircraft that they were working on to rebuild and they showed me how they were working on the aircraft on the inside and the outside. 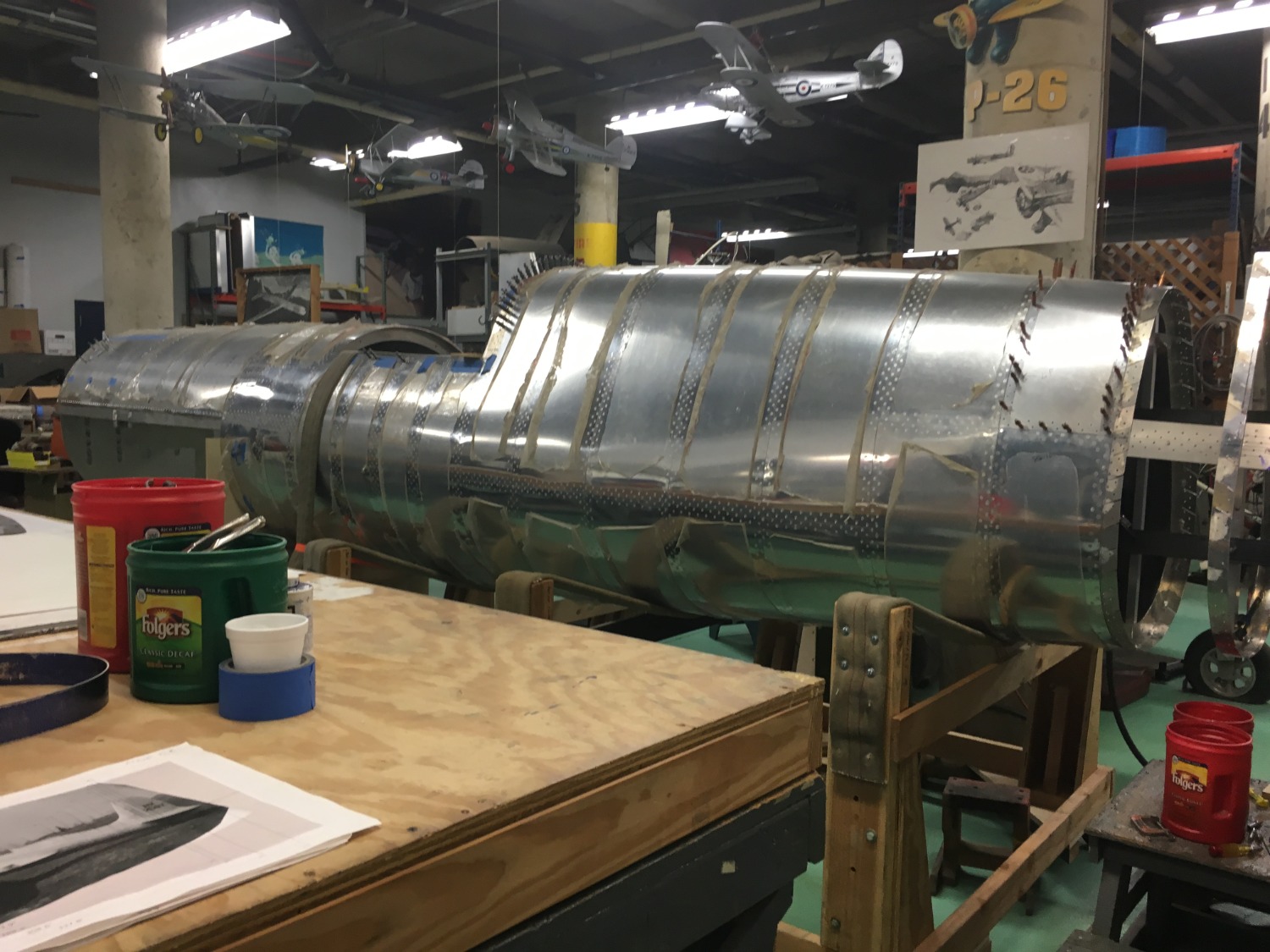 He walked us around and showed us the really old Rolls Royce engines that they are working on and how they are all broken up and replaced, fixed and then put together again. I saw loads of pistons, I think he called them that power the engine too. I had a go at moving the landing gear on an exhibit up and down and saw how the wheel twisted when it was put away. Mort also showed me this engine which is a reproduction of the airplane engine that the Wright Brothers used in their 1903 planes. Every November they roll this out to show people what it looks like and sounds like. 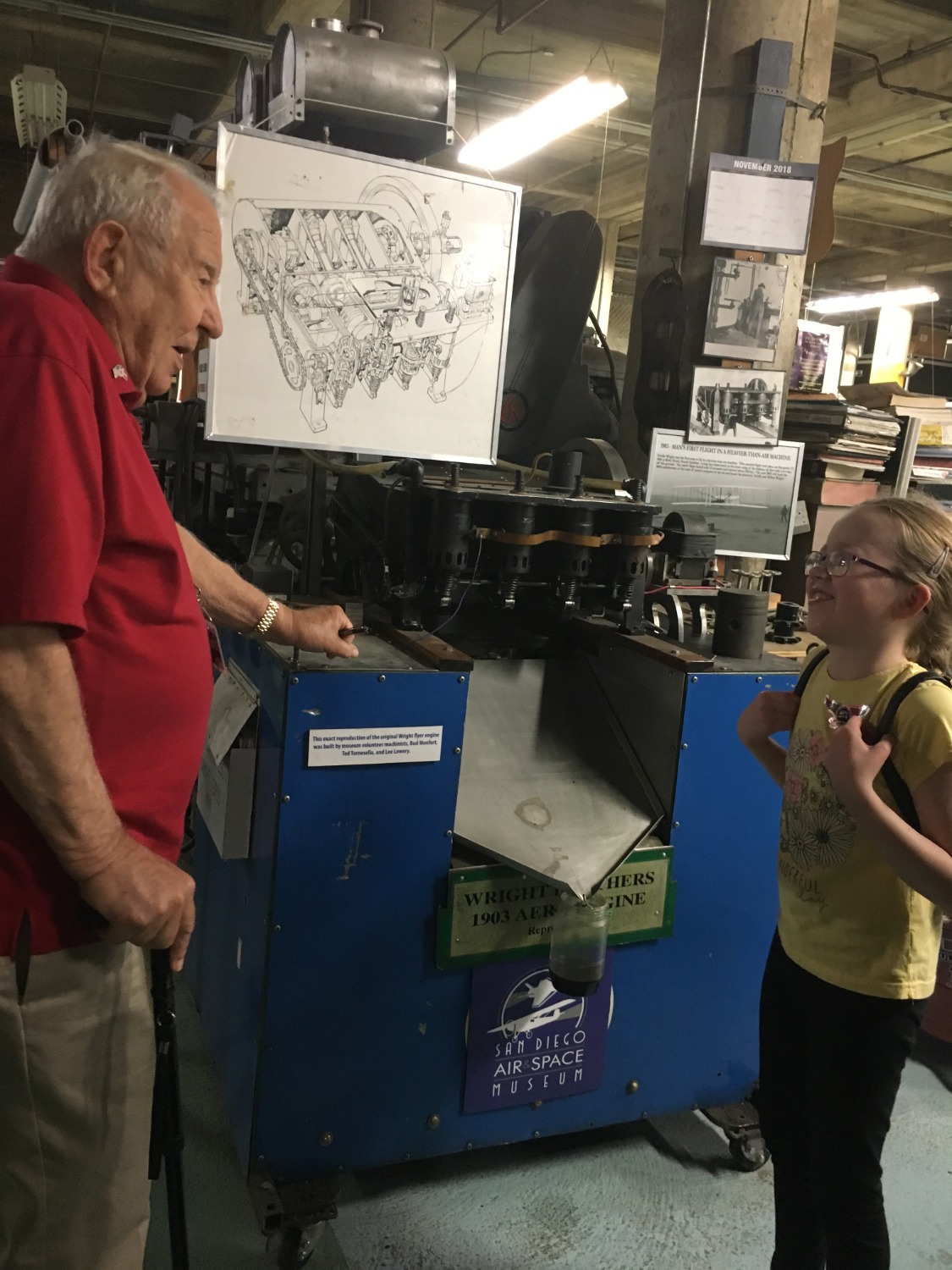 Whilst we were walking around in the basement we came across a man known as “Parts” I think it was? He was always working on something from scratch to exhibit. He was creating something from blueprints and photos and he first builds like a copy to make sure he gets sizes right and then makes it properly afterwards. 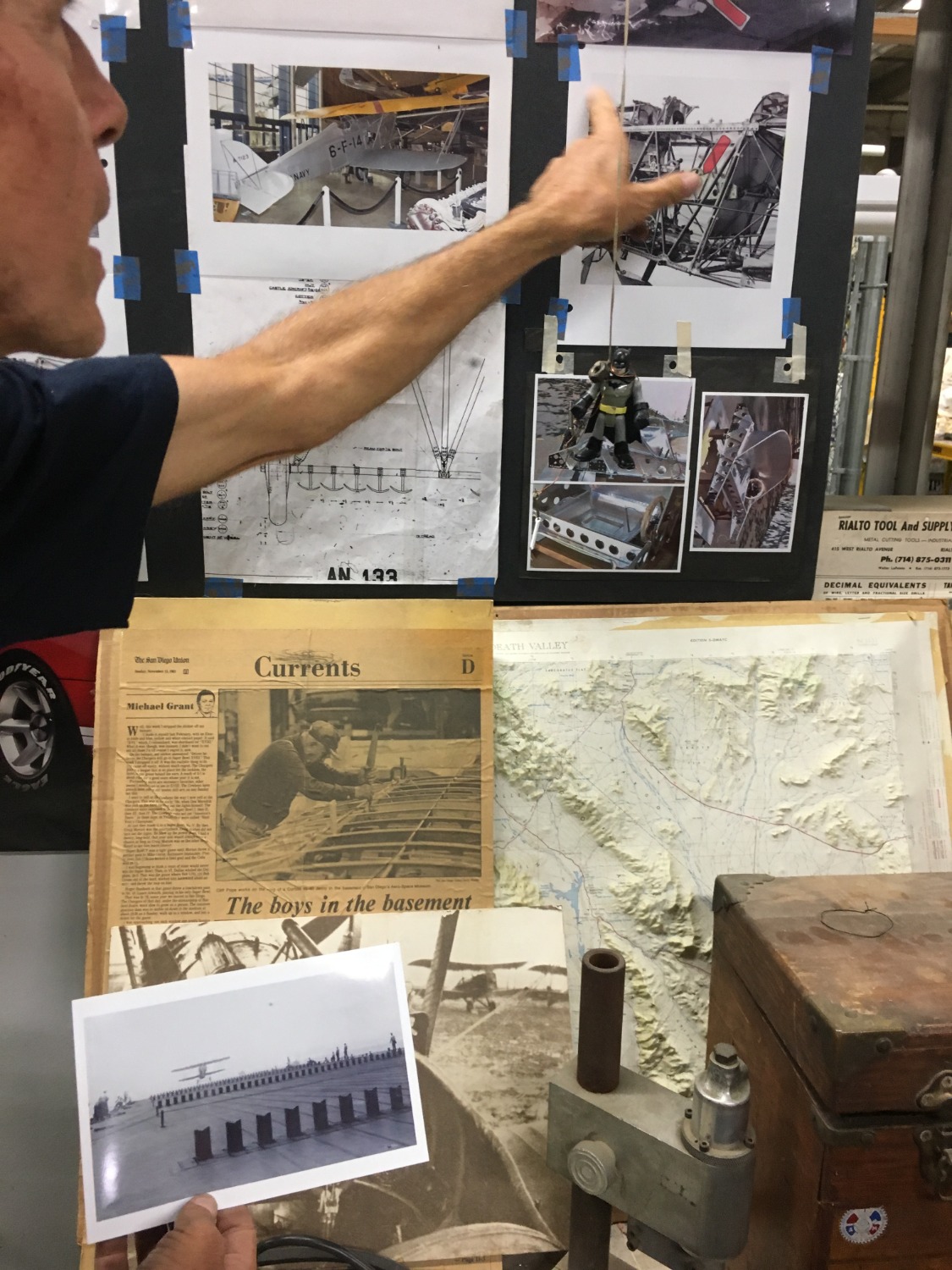 Another project they are doing is this wing below which is being made in the basement of the museum as well. They are doing it on the tools there and by hand as well. Sometimes these can take from a few months to a number of years! 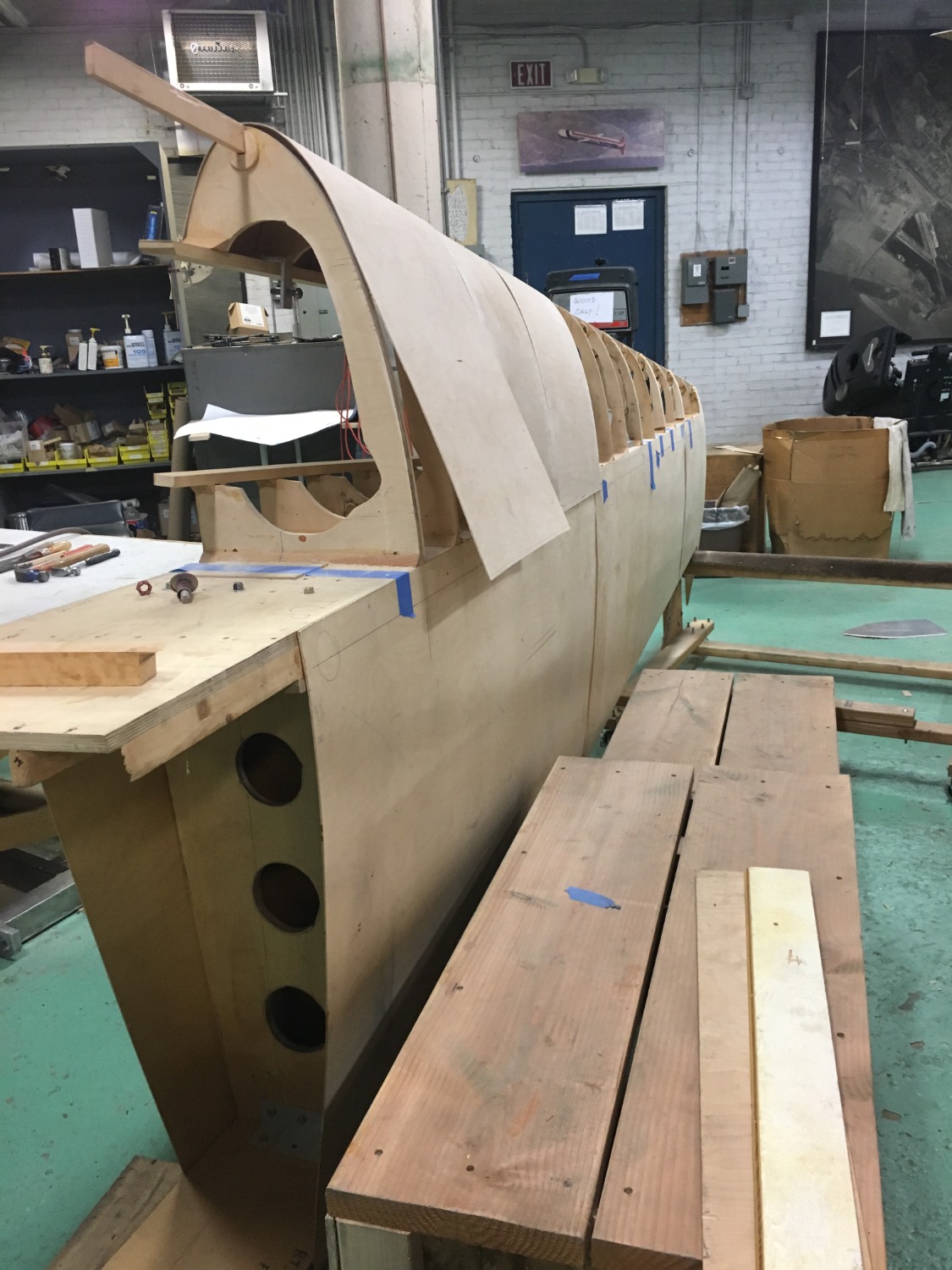 I mentioned to Mort that I was in San Diego and LA for a visit to the Jet Propulsion Laboratory and he said he had helped collect two teams from the Apollo Space Program as a Doctor. Please read this article to learn more about his experience.As he had been a part of the program, he was given a commemorative coin to keep and he had it on him, please see below! 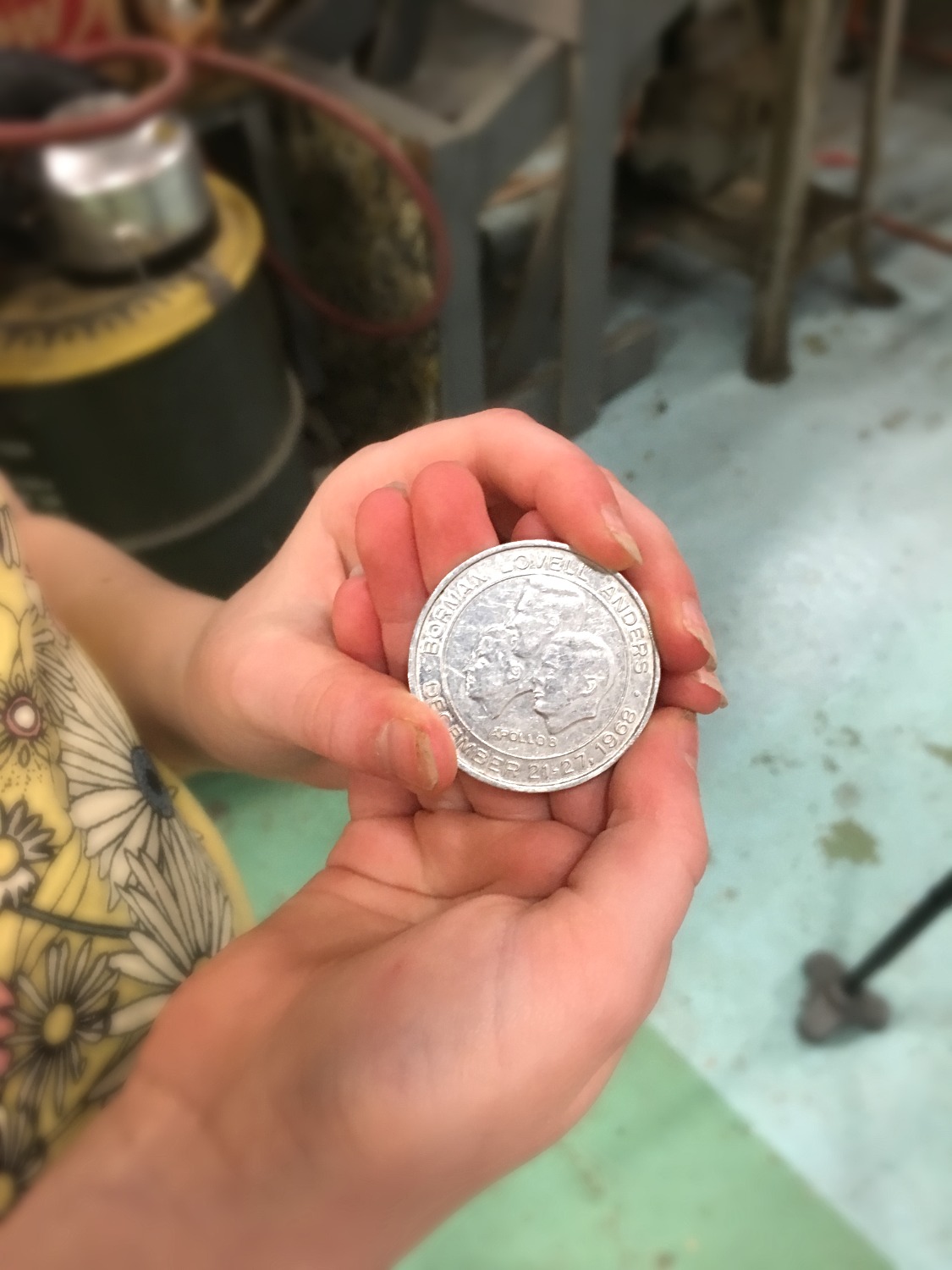 I really want to thank Mort for giving us his time last Friday and showing us around. I really enjoyed it and I hope to come back again some stage to see how these are getting along. 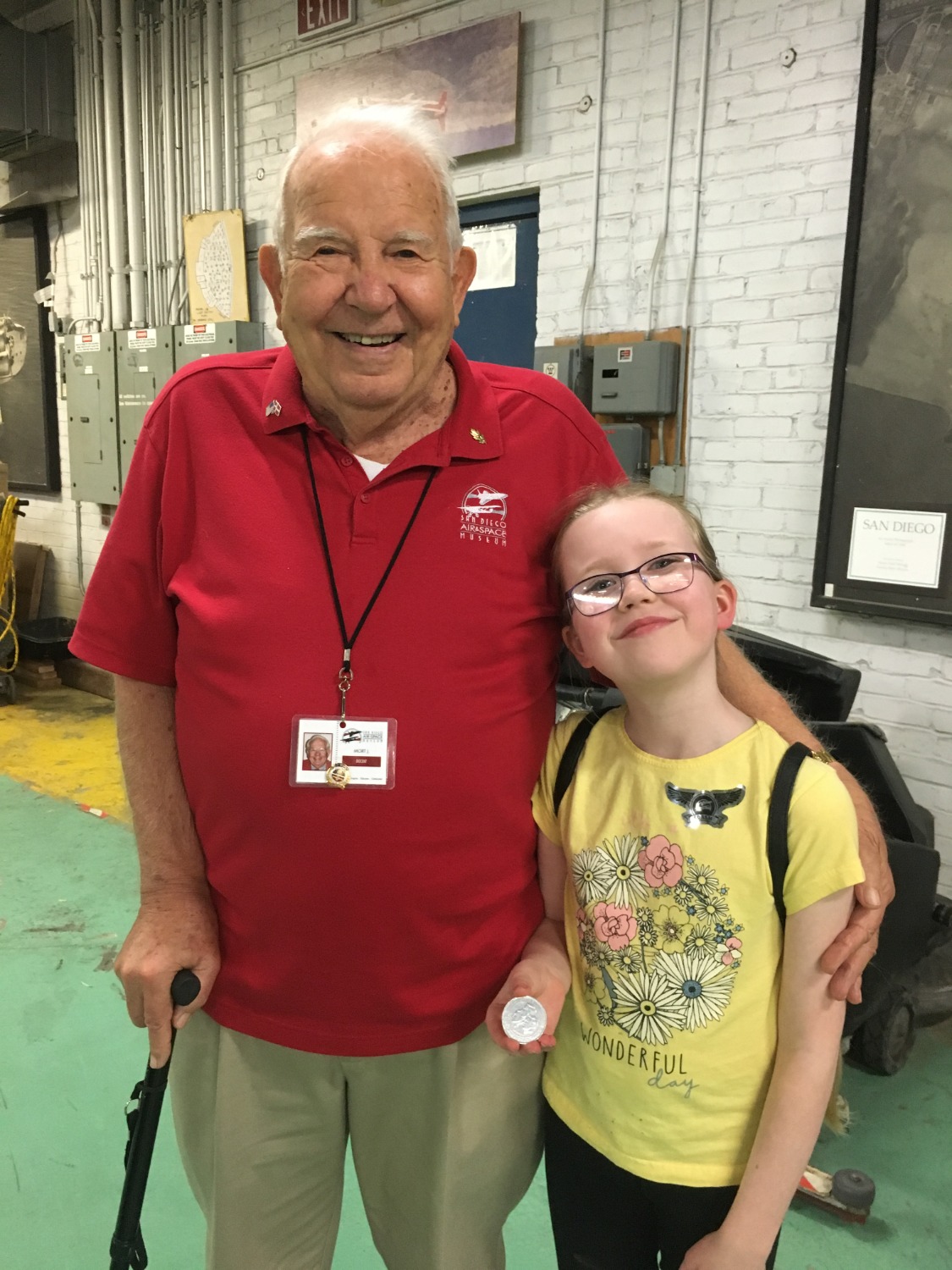