My 2 Weeks Immersed in Space and Science!

My 2 Weeks Immersed in Space and Science

I know I must seem to have dropped off the face of the Earth recently but I have been really, really busy in the background and more importantly on Social Media over the last 14 days.  So I thought I should let everyone on here know what I’ve been up to this past couple of weeks!

After months of talking about it and weeks of suggesting scripts and days of practising the scripts, I arrived at Explorium last Monday and met with my friend Mark “the Science Guy” Langtry.

We met at the end of the working day and just as the clock struck 6pm and the last members of public started filing out, I was watching the lights go up in preperation of the filming we were doing at the “Movie World” location. 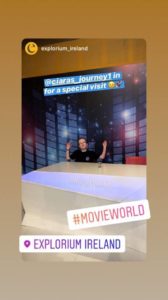 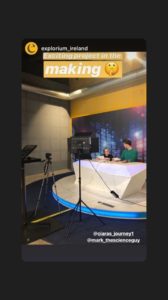 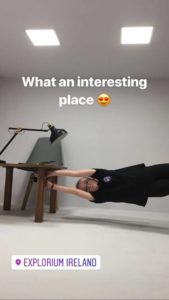 Mark and I started reading through the scripts together one after the other.  It was so difficult to keep a straight face!  We got our lines mixed up, our words confused and I spent a lot of time looking at my script initially.  After the cleaners left and we said goodbye to literally everybody who was left at the centre we started filming properly about 7pm.  We had so much fun doing this!  What a great guy to work with!

I can’t tell you too much as we want to keep it a surprise but we also did some filming in the Tesla Coil room too!

We finally wrapped up around 8pm and headed home.  What an experience.  Keep an eye out for the video hopefully coming soon,

Unfortunately I couldn’t go because of school but my Mum did!  She was at both days of this years Dublin Tech Summit.  She even got chance to speak to some of the Space speakers there.  On the first day she sat down and spoke with Dr Douglas Terrier the Chief Technology Officer of NASA!  She also had a quick chat with Alyssa Carson the future Mars walker.  She is only 18 (last month) and is scheduled to go to Mars in 2033.  They both sent me personal message videos!  Alyssa also gave me a signed book of hers! 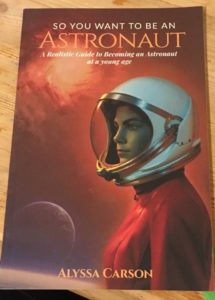 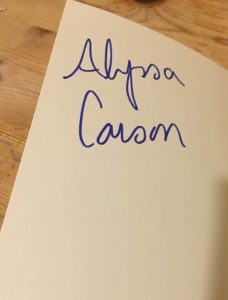 Then she signed the inside for me

At day 2 of Dublin Tech Summit was Commander Chris Hadfield!  I was so sorry not to get the chance to meet him.  He was the main speaker of the day and he even did Space Oddity on stage:

Later that day my Mum sat with Dr Norah Patten!  She had come to meet both Alyssa and Commander Hadfield.  Norah is in the same training group (Project Possum) as Alyssa and only met last year for the first time.  Norah had never met Commander Hadfield before but had a message from him last year wishing her the best as she is the first Irish Astronaut ready for space in the next few years!  I was so happy to get another message that day from Norah as well.  So I had a message from everyone in the picture below. 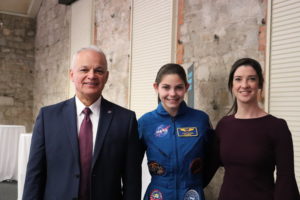 A few weeks ago my Mum and I put out a Tweet out on Twitter to look for people to speak to and interview for my recent series.  One of the people who contact us had a friend called Dr Valerie Connaughton. 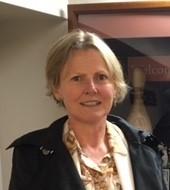 When you look at her profie you will realise why I simply had to talk to her!  She is the most senior person I have ever spoken to personally at NASA! (OK, well I have only spoken to two…).  After much working out we organised to speak on Saturday last week around 2:30pm (or 8:30am for her) and we chatted about so many things!!

Here’s a list of some of the things we covered:

After an hour we closed the conversation and then she sent me loads of links to study to learn more!  She was really interesting!

This week I had the opportunity to actually meet and talk with Professor Turlough Downes.  He is based at Dublin City University and he had agreed to speak to me after me putting a call out on Twitter a few weeks ago.

I didn’t particularly want to formally interview Turlough as I only really wanted to sit down and chat with him without having to think about how it came across on screen.  I wanted to learn from him exactly what I needed to know to become an Astrophysicist.  He mentioned having a knowledge in Chemistry and if given the opportunity to do later, then do Applied Maths.  Also to keep doing Physics kits and exercises where possible.  He said I would also benefit from a good basic understanding in Coding as well.  The only reason why I haven’t done this before is because my nearest CoderDojo runs its class the same day and time as another activity I do.  However, I came across Code Club at ESB Science Blast earlier this year and they provide online training as well as an option.

In the end we spoke about Black Holes, Supernova, courses, what to learn and a whole lot more!  He gave me an hour and a half of his time and honestly my head was spinning by the end!  Thanks Turlough 🙂 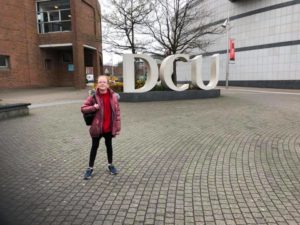 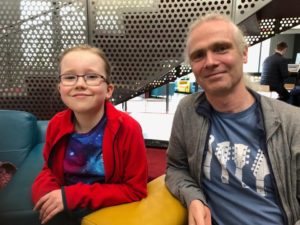 Finally this week I spoke with Dr John Regan also from DCU.  He was another man who got in contact with me via my Twitter search.  We had arranged to speak this week, 2 weeks ago.  It was really fortunate that in between – the first ever image of a Black Hole was put out publicly.  Especially as John is a Black Hole specialist!

Listen to my interview below with him and give me your thoughts about Black Holes in the comments below or talk to me via my social media channels!

Now I am off for the remainder of the Easter break.  I hope you keep looking up to the stars and keep discovering!