Earlier on in 2019 I went to Galway AstroFest for the first time with my Mum.  It was a brilliant event and I got to meet a lot people.  One of them was Fiona Hopkins the organizer of Mayo Dark Skies Festival which is where I have just got back from over the last weekend.   It ran from the 1st to the 3rd of November.

Fiona had mentioned to me about her event and suggested we give it a try this year, so I joined the monthly newsletter and as the speakers and events were announced over the past few months I have been genuinely looking forward to this event.

My Mum and I decided to stay at a family members house in Mayo the night before the event and we sat down to look through the online programme and ticked off the talks we wanted to attend.

We decided to stick to the Newport Hotel for the talks and the stands there.  It was a shame we didn’t explore the other talks and locations but the speakers at the hotel were amazing!

On arrival, we met up with Fiona and she welcomed us and even recognized me!  She then walked us through to this large room and we explored the stands.  It was great to see KTEC Telescopes again and Meteorites.ie.

As we got there early we got a seat at the front and then mingled with the crowds briefly before the first talk began.  First up was Derek Dempsey at 10am.  He talked about “From Earth to a Sun-Centered Universe”.  This was an accurate history lesson about how we (people) went from believing that the Earth was the centre of the universe to where we are today.  It was fascinating!  He took us from right back in the 1600’s to present day and showed us books and pamphlets of each of the discoverers. 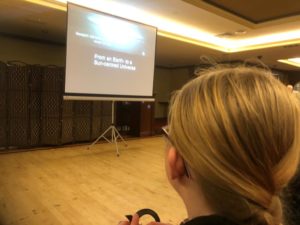 During the short coffee break I got a chance to try the VR experience brought in.  It was seeing how dark holes capture light.

Next up was Neils Warburton who gave us a very in-depth look at their research into Black Holes.  I felt at the time I understood a lot of what was said but I’m not sure how to explain it here very well! I’ll try my best though.

There is quite often a black hole in the centre of a galaxy, and from time to time black holes collide when galaxies merge and send out shock waves through out the universe. Here on Earth we have LIGO (Laser Interferometer Gravitational Observatory)  to tell us whenever this happens and can show us how powerful the shock wave was. It’s very sensitive though, it can even sense cars driving on roads miles away!  This talk was fascinating and I would love to learn a lot more on this topic.

Another great talk was Living On Mars a talk by Dr Niamh Shaw.  It was all about her ‘living’ on Mars (the Utah desert).  She and other men and women lived on ‘mars’ for two weeks learning what it would be like to eat powdered food, fix a blocked toilet, sleep in a cupboard, wear a spacesuit, care for plants and even carry out experiments.  She told us that after living on so little, when she got home she realized half the things she owns she doesn’t actually really need. It sounds like quite an eye opening experience, I must try it out some time. 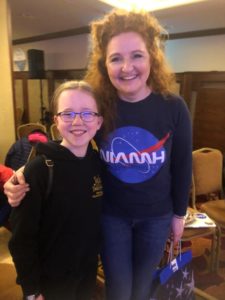 Last talk of that Saturday was a talk by Mark McCaughrean about the upcoming projects in ESA! He talked about Lunar Gateway a sort of ISS except around the moon and what sort of base we might eventually sent up on the moons surface. He also mentioned the previous missions and missions that are planned for the future, I didn’t realize there were so many.  Maybe someday I’ll be working on one of those missions programming, building or maybe even leading the way of it’s research. Hmmmmm. 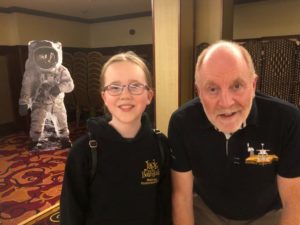 Anyway, he also talked about the continuing work of finding new planets that might have life. The clues their looking for include water, an atmosphere and a source of heat. 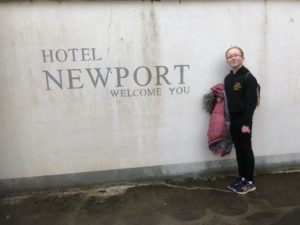 The next day we came back for the second day of the festival.

The first talk that day  was by Dr Niall O’Connor, a talk titled ‘No Solids Please! or liquids or gas.’  It’s all about the thing that makes up most of the universe, plasma. Plasma is the fourth state of matter, after solids, liquids and gases.  It makes up 99.999 percent of the universe, but up til today, I barely knew it existed. I still don’t know too much ( a lot of it was a bit over my head ) but I do now know that  (1) I need to learn more about plasma and (2) that plasma is a fascinating substance. 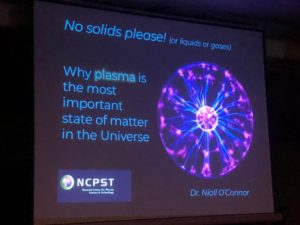 The last one we saw before we had to leave was by Dr Niall Smith about ‘Is Ireland A Great Place To Be In The Era Of Space 4.o. This era belongs to ESA, JAXA, NASA and others. The new space agencies joining this era are SpaceX, Blue Origin, OneWeb, Kepler and Virgin Galactic. They have a strategy for Ireland and the main objectives of this strategy are 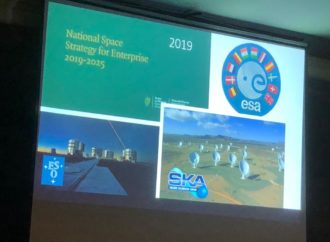 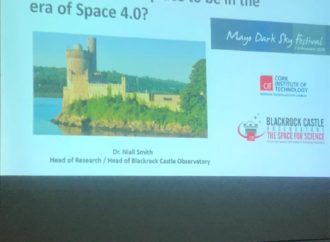 We had to leave early unfortunately on the last day and missed the last two talks.  However, on the way out Fiona spotted us and said we must meet Canadian astronaut Bob Thirsk the festival special guest, before we leave. 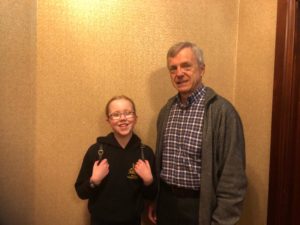 I was so happy I got the chance to speak with him alone for a short while and he said I can send him 3 questions by email and he’ll answer them.  So watch this space!

Please leave comments as to what I should ask him?

The Mayo Dark Sky Festival was an extraordinary event.  I’ve met a lot of knowledgeable people and have learned things I have never dreamed I would learn.  I’m definitely going back next year and maybe you should too!  I hope to stay closer and even take part in the Gala Dinner next time.