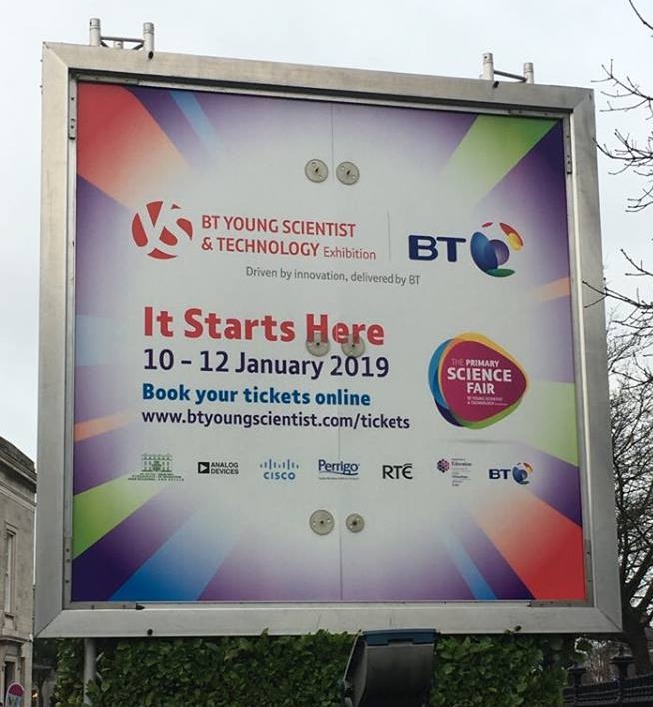 Last weekend I was back at the BT Young Scientist Exhibition, held at the RDS in Dublin for the 3rd time!  The first thing you see as you walk in is the sign in desk.  There is student sign in and teacher sign in and you can buy guides which include a map, a list of events and a list of all the exhibits that students have prepared. 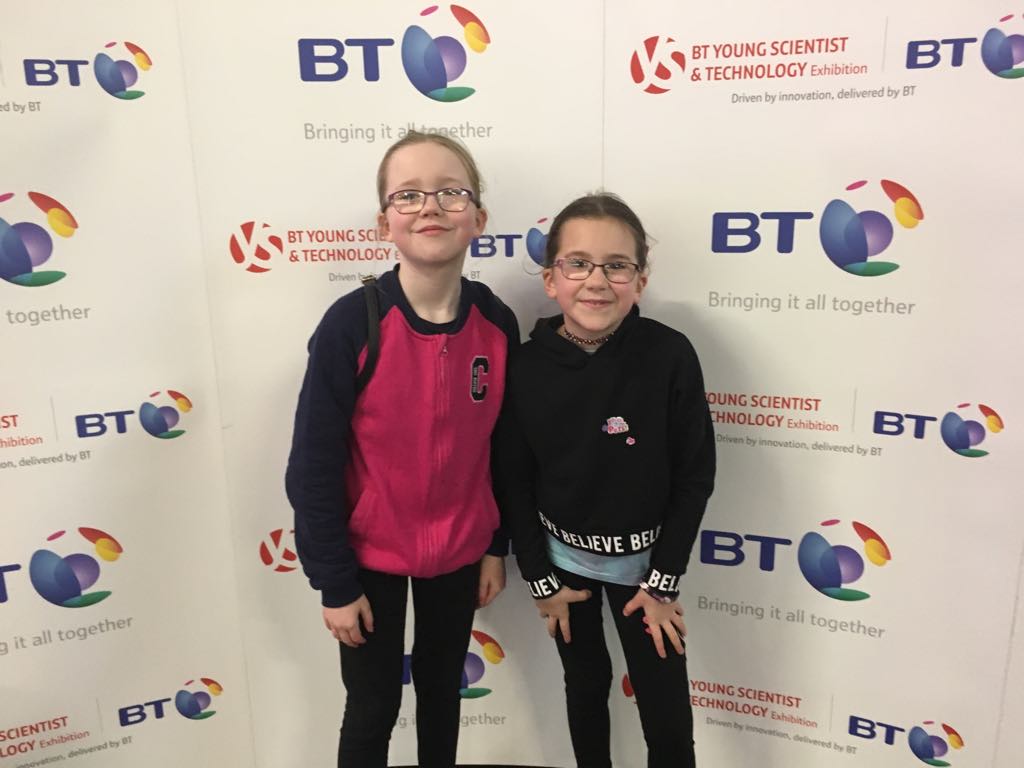 After a quick pose (above) the first place we headed was the Science and Technology area which is full of loads of hands on experiments, shows and areas to learn more about science.  Here are some places that I think are worth your while to have a look at the next time its on.

In Coder Dojo you can learn to create websites, video games, electronic circits and more.  You just look up dojo.soy/join to find and join a local Dojo.  Myself and my sister had a chance to play some games there. This one is called PacMan. 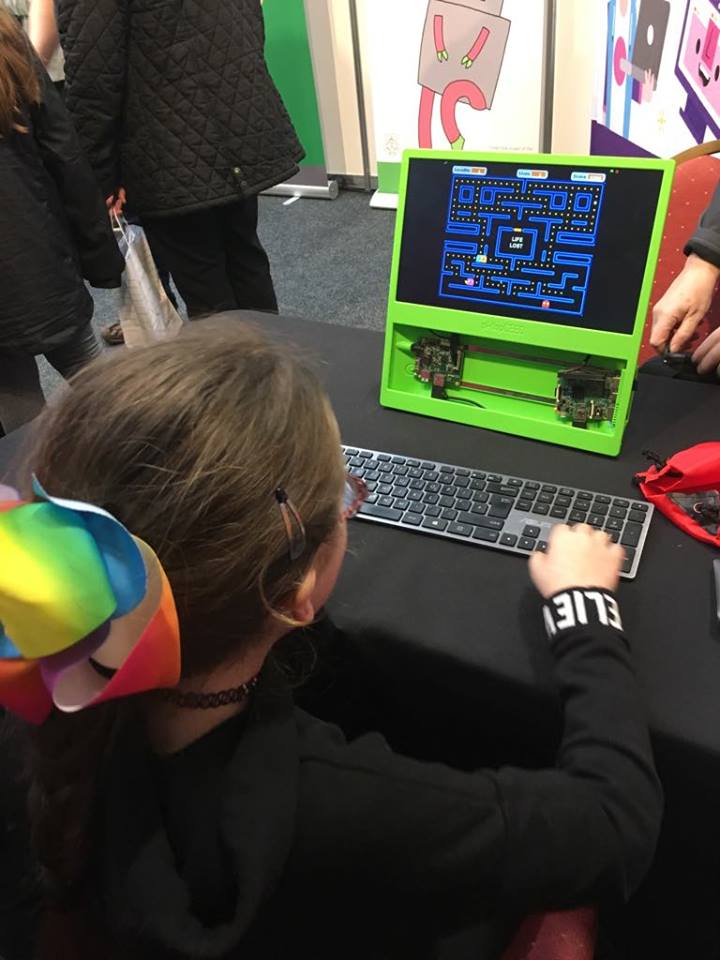 At the event there was also The Star Dome.  It is a movable blow up dome where you can watch different shows such as Earth’s Wild Ride, Ringworld and Two Small Pieces Of Glass.  The Star Dome can also visit schools as well. It can hold up to 35 people at once. On the day we watched a little show showing us what that night sky was going to be like in Ireland but I don’t remember what it is called now?  I really enjoyed it and I hope to visit Blackrock Castle Observatory this year at some stage!

Let’s Find Out is a TV show for around 5 to 7 year olds. It’s where Mark Langtry and Ciara Murphy do experiments and answer kids questions. On the day there, they peformed experiments from the show.  It was interesting and it included volunteers. Me and Megan got a chance to take part – see below! 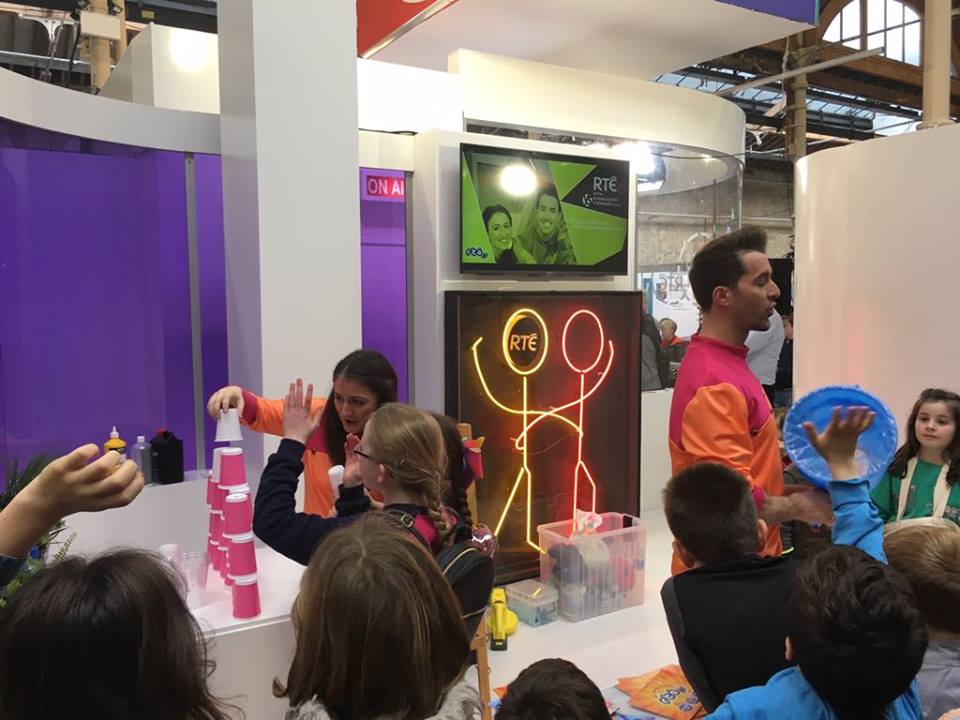 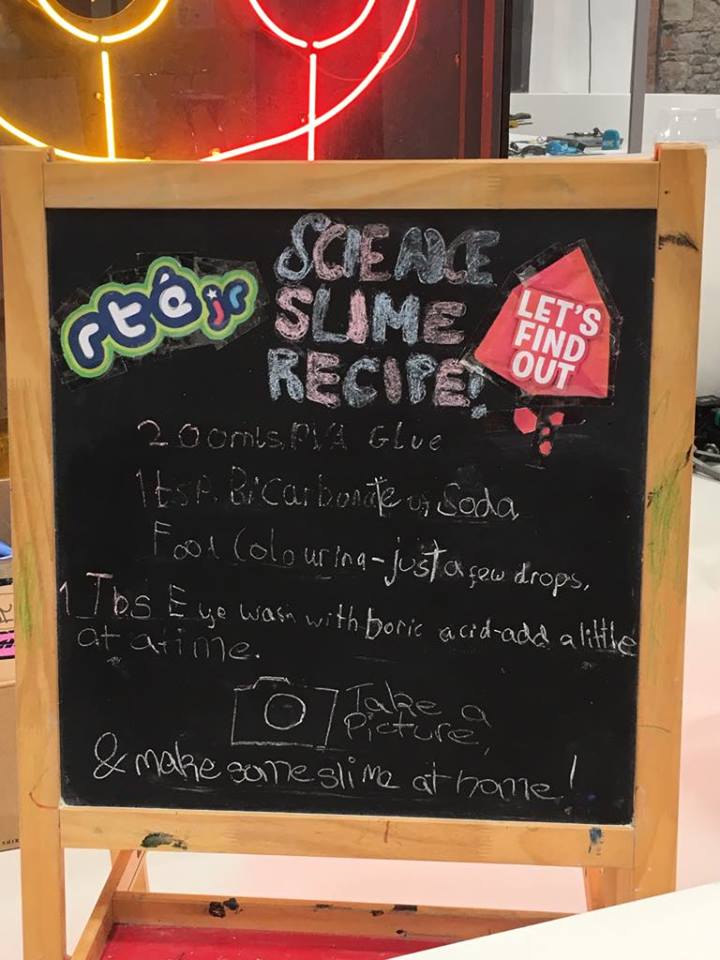 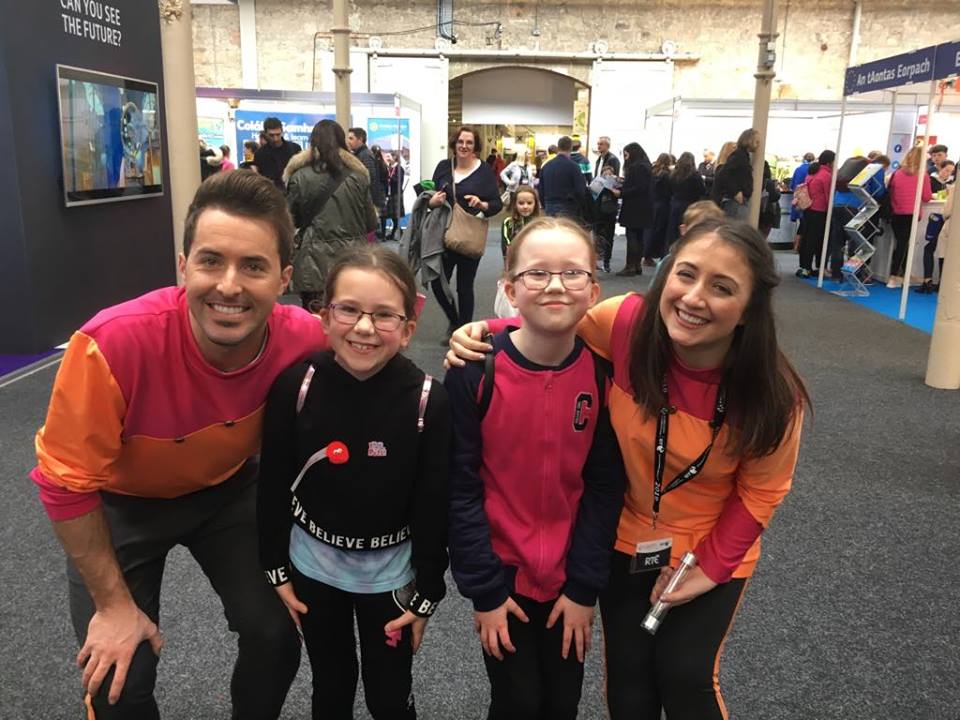 There was other areas like this stand, where they had areas like an endless tunnel, a harp you can play using lasers and a box full of rice that actually could interact with. You could pile up the rice and it would start looking rocky (like a mountain) and if you lowered it down it would get grassy. You could design with your hands as well by hovering over it and water would start appearing and would slide down the mountains and would gather. I saw something very like this at Explorium last month.

Another area was Walk like a Dinosaur were you would wear motion sensors on your wrists and ankles and you would have to run as fast as you can.  The sensors would then work out what dinosaur you ran like. I remember one year I was a Triceratops!  After exploring that room, we had a snack from the food area and then we were back looking around. Next we went to the ECO ZONE.  In there we stopped off briefly at the Geological Survey stand.  I had a look at the microscope they had there and saw a very small fossil that looks like a snail.  The lady at the stand said it was about 300 million years old!!  Did you know that Geologists have to have a lot of training?  They need to know a little bit about all aspects of science. 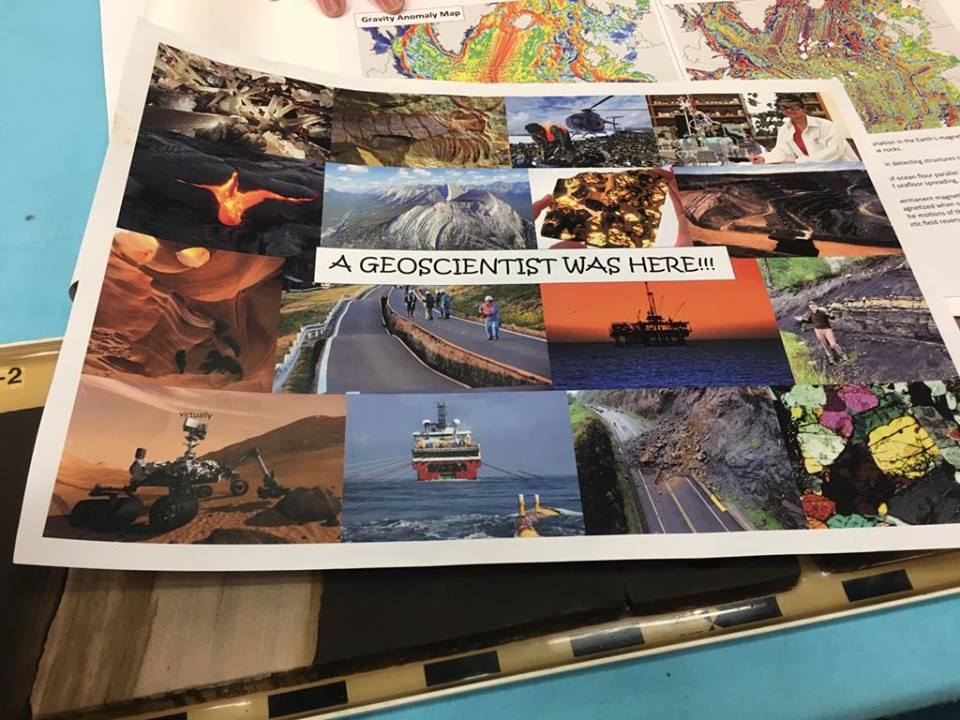 They also showed me a picture of a scan of the ground that is 250 kilometres wide and 25 kilometres deep and takes three months to do using a boat! (The picture below). 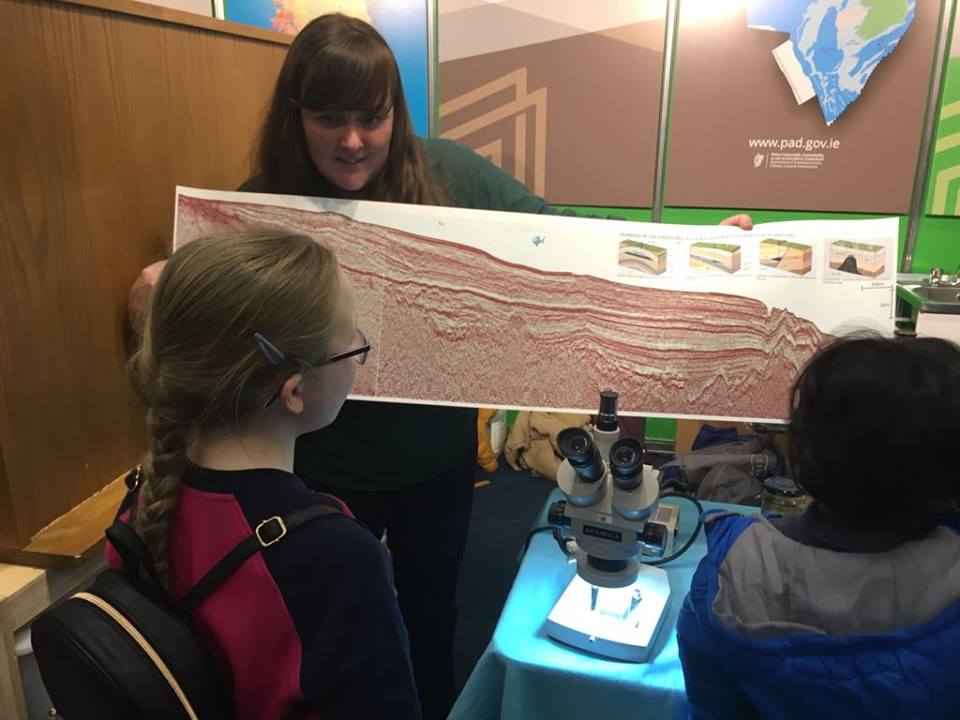 Dublin Zoo were there as well. When we went over to their stand they were talking about dinosaurs! They mentioned that they have a display at Dublin Zoo. Also there were the Gardai and the local Water Patrol. There was VR, showings of dinosaur bones, showings of how to do CPR and more. Usually nearby there would be the primary area for the primary schools projects but unfortunately there was a rugby match on or something and none of them were there. I think I must have missed them by a day? 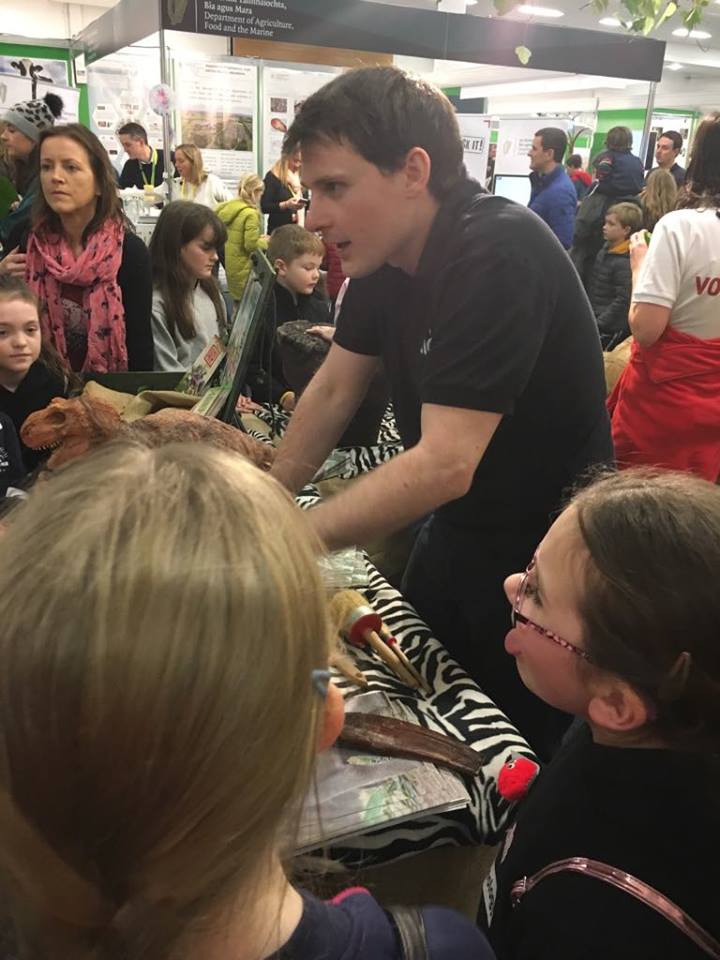 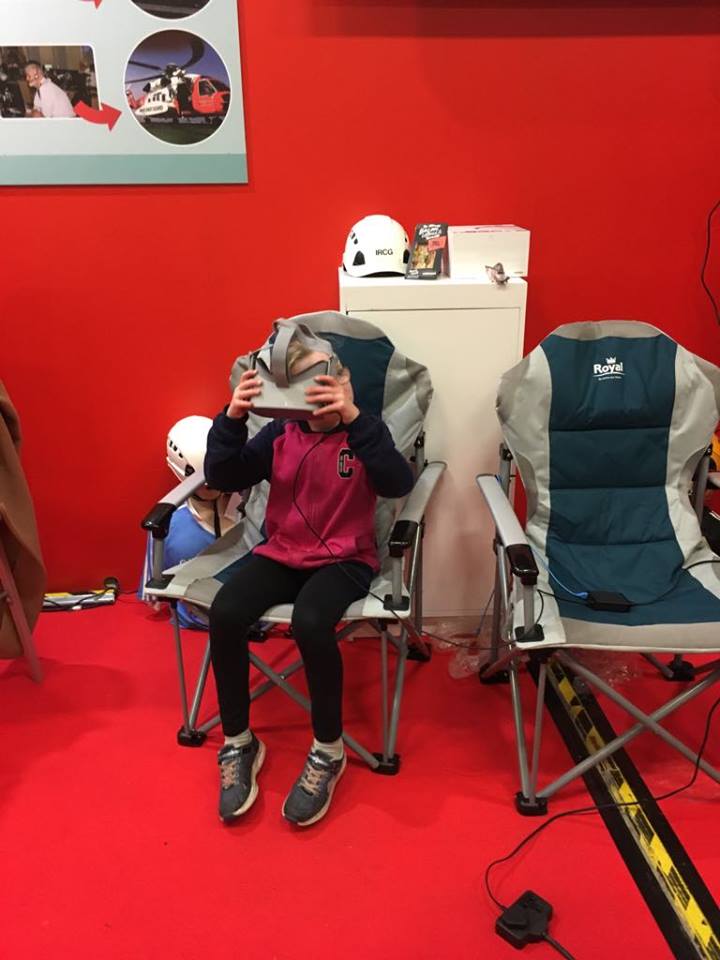 Then after that we went to see the projects that all of the school Students have been working so hard on for months. There were different catagories of project. Biological and Ecological Sciences, Social and Behavioural Sciences, Chemical, Physical and Mathematical Sciences and of course Technology. Some projects were:

There were so many fascinating projects that I think I will have to go back each year as it gets better and better. To find out how to apply for next years BT Young Scientist then click here – entry will open from August 2019.