Having a Blast at ESB Science Blast!

Having a Blast at ESB Science Blast!

This week I went to the ESB Science Blast for the first in Dublin.   There are 2 further shows, one in Limerick in May and another in Belfast in June. 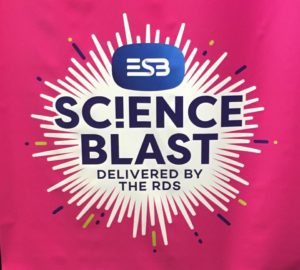 We parked and headed to the entrance and after signing in and getting my very first Press Pass we [me and my mum] got our passes and stepped into the main hall.  My first thought was “how alike this is to the BT Young Scientist”, because it was at first glimpse almost the same.  There was lots of Projects everywhere, kids hanging about, stands around the edges and side shows teaching you everything from The Physics Of Breakdancing to The Solar System through raps. More on that later.

This event is for 3rd to 6th Class Primary school students to enter their experiments and questions.  Please find the link to learn about entry here for 2019.

“Involve the whole class in this non-competitive programme investigating the science behind a simple question and then display their work at a showcase event. Science is everywhere and in everything, so you can cover a huge amount of the curriculum through participation, from art to numeracy to language skills.”

We headed first to the sponsors stands around the edges. Explorium was there along with Go Fly Your Kite, Science Apprentice ànd others. I made a mental note to go on Exploriums VR ride and maybe the bed of nails.

Next we went to check out a few stands. Code Club caught my eye because I’m actually getting into coding.  I got a business card as well as some good advice on what apps I should use for coding. He suggested Scratch but Tynker is more suitable for beginners. Please check out their website and you will see videos on how to code that are available online right here. 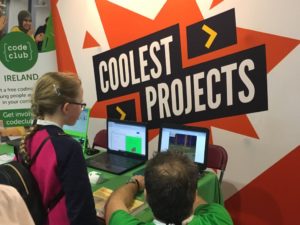 There was a Science Apprentice stand , an area filled with experiments, lego, activities, colouring, drawing and even their own book.  They have also written their own books.  They cover various areas of interest including: Illusion, Up in the Air, SuperBodies and How it’s Made are the titles of the books, each with their own Teachers manual,  (We picked up one of each!).  This was the idea of people based at UCD and wit the help of  team they created this series.  Me and my sister will be working our way through these books.

Next we started looking at some of the projects.

Food Myth Investigation in Apples and Carrots. Really as good for our eyes as we were told? by Sacred Heart N.S. Clondalkin Dublin 22. 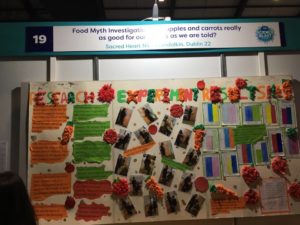 What is the Effect of Gaming on Your Body?  Killasser NS, Swinford, Co Mayo.

This had all sorts of graphs that included: Do You Like Gaming? What are Your Favourite Games? Do You Play More on Weekdays or Weekends?

It turns out that gaming increases our pulse, our pain tolerance our breaths per minute and our reaction time lowers.

A Rappers Guide To The Solar System

The rappers name was  Jon Chase (known as Oort Kuiper on social media channels) and he was a pretty good rapper.  He’s also a science communicator with a great way to teach people.  He showed us the scale of the Solar System if the Earth was a grape and the rest of the planets were fruit.  He also explained what STEM is through, you guessed it, a rap.

What Effect do Sugary Drinks have on our bodies?  by Catholic University JS, Leeson Street Lower, Dublin 2.

I was shocked to see that Pepsi had 56g of sugar!  (Last time I ever drink that!)  They asked kids in their school a poll of how much sugar you think a child needs everyday and some kids said 360g and the lowest was 40g but the actual answer is 25g. 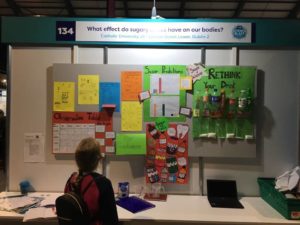 Can we develop an algorithm to solve the Rubiks Cube?  Mhuire NS Mullingar, Co Westmeath 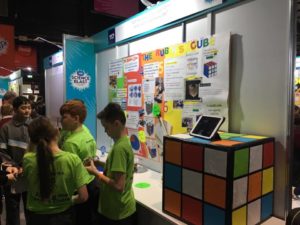 It’s not Rocket Science or is it?  St Brigids BNS Foxrock Dublin 18.

Was about how hard it was to build a rocket.  It was great fun, they were shooting handmade rockets all over the place!  I saw they had built different types of rockets made out materials like foam, paper and balloon and launched to see how successful each version would be.  They said the most successful was the foam and least was the balloon. 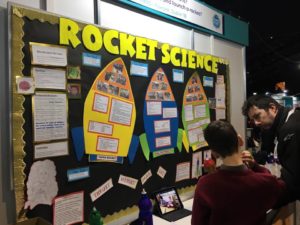 How does the Colour of Food affect our Perception of it? St Altans NS, Cherry Orchard Avenue, Dublin 10

This experiment was done by food colouring different pots of popcorn and asking people if the popcorn tasted different.  Then the public could tick a yes or no sheet of paper.

We then visited another stand called Go Fly Your Kite in the sponsor area and they explained that this was a STEAM activity where kids could design and use their own kites using their kits.  The kite is really easy to build and comes with all the colours, strings and ribbons so a complete set and I flew this one inside the RDS and it was amazing how quickly it went up and stayed up!  I was able to bring one home and will be designing and using this myself and will put up a YouTube video about it in the coming weeks. 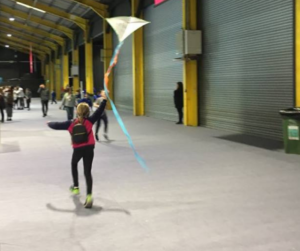 Action on the Side

We did pop in and check out one of the shows being put on by Mark the Science Guy about the Physics of Breakdancing.  We caught the bit about Friction and Momentum and watched Mark in a video on the snow and falling down a Black Slope at speed.  He was demonstrating how he lost friction and gained momentum!  The breakdancing was amazing as were the support dancers.  They where selected from a Ballet Class and they brought a lot of fun to the demonstration. 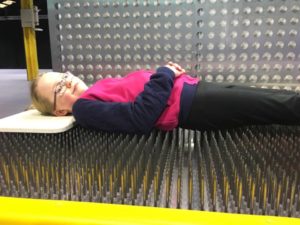 Last but not least we went back to Exploriums stand and we had a go on the bed of nails and on the VR Rollercoaster which was amazing!

I found  the whole day a great learning and experimenting experience and you get to be arty and practice public speaking as well.  I found the talks and workshops really interesting and I will do my best to talk my school into going next year as it will be the last chance I can enter it.