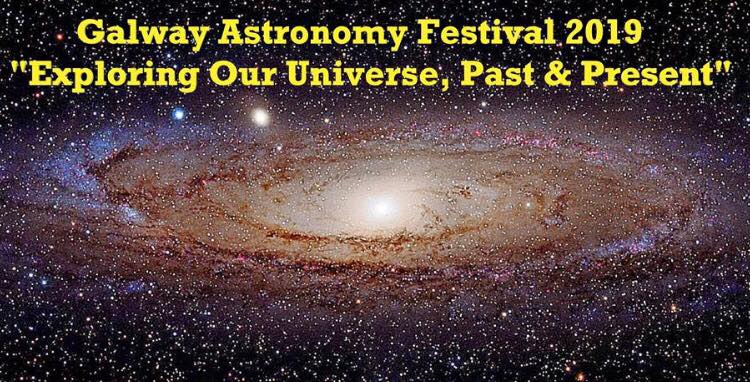 After a long and wet drive yesterday I arrived at the Galway Astronomy Festival.  It’s my first trip to it but its been running for 15 years!

The first thing we looked at after we got there was a stand called K-Tec Telescopes.  You might know that for my birthday earlier on this month, I got a telescope that came with a couple of different lenses for better magnification.  Stephen of K Tec told us that you should NEVER, EVER clean a telescope lense. Ever.  You stop it getting dirty by always replacing the lens cap after use, so it doesn’t ever get dirty.  You shouldn’t clean a telescope lense, even though they usually come with a cleaning wipe because there is some sort of liquid protective film on the lense that protects the glass.  We managed to buy a brand new 5″ lense.  Lenses get closer the smaller the number for example 10 is better then 20, 5 is better then 10 etc etc. 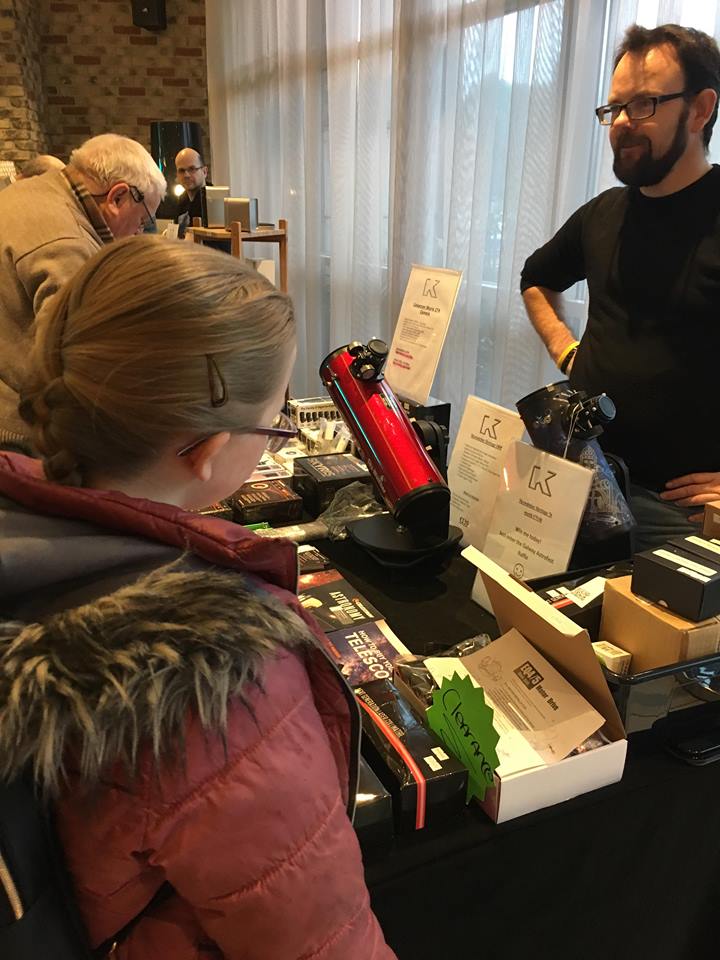 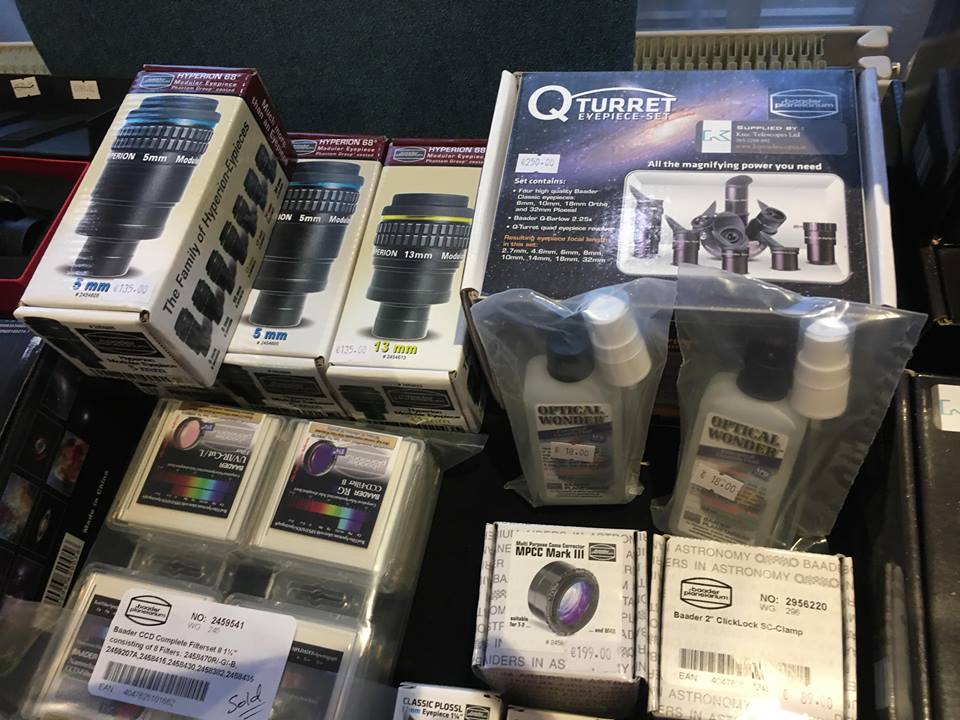 Right next to that stand there was another stand run by another Steven, Meteorites.ie.  He let me hold moon rock, test how magnetic some meteorites were, hold natural glass MADE by meteorites impacting the ground and other bits and bobs.  He even gave me some meteorites to bring home free of charge! =] 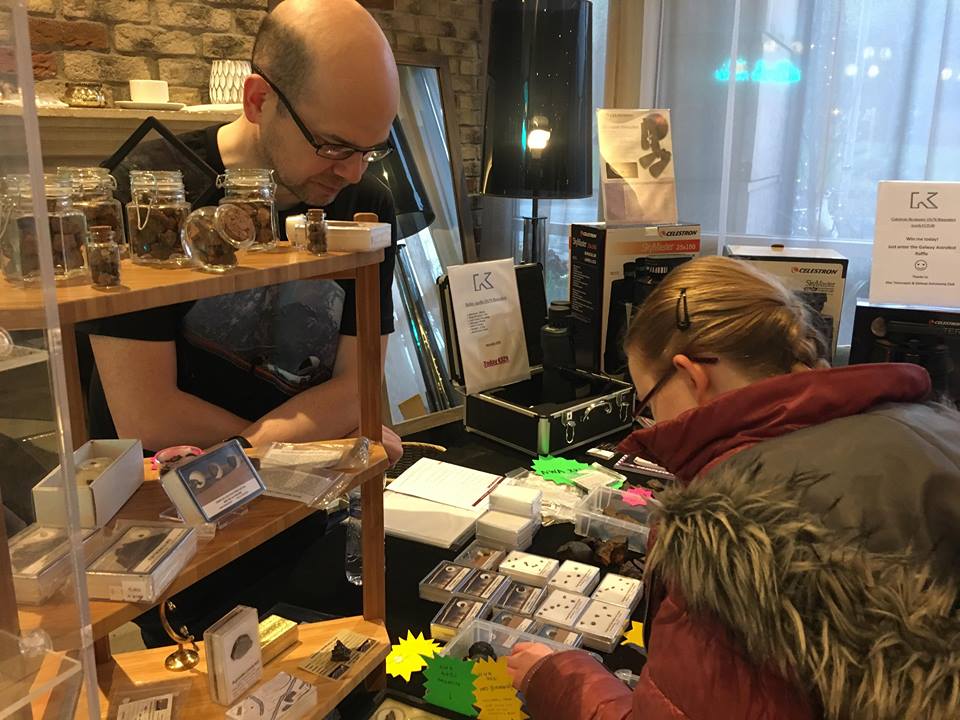 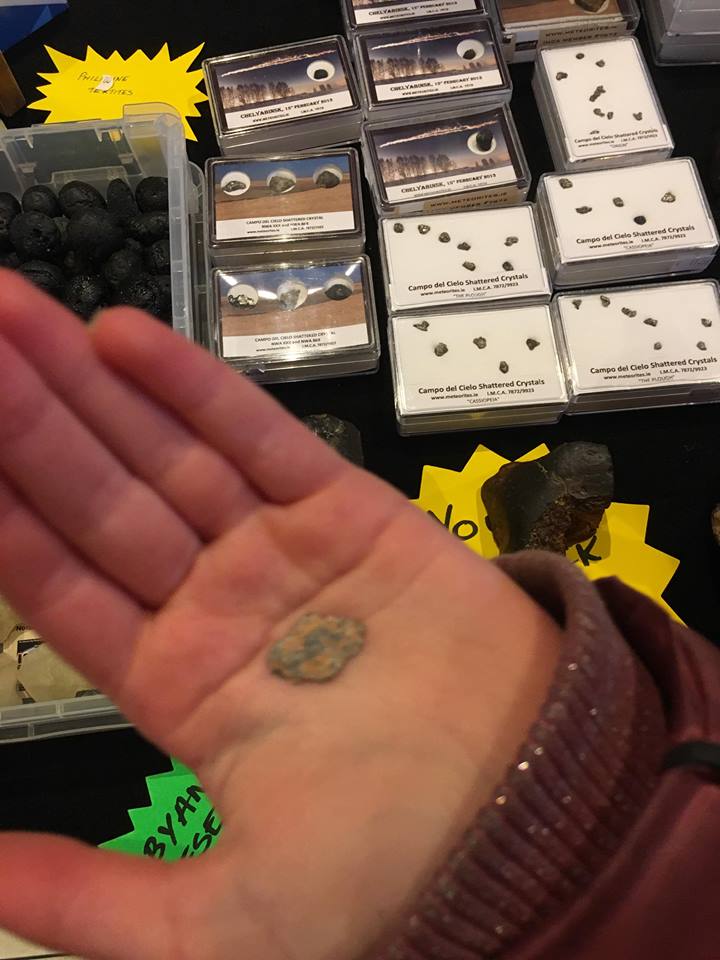 After that we went over to Galway Astronomy Clubs stand and got an astronomy calender and met up with the organisers of the event. Here I am with John Flannery: 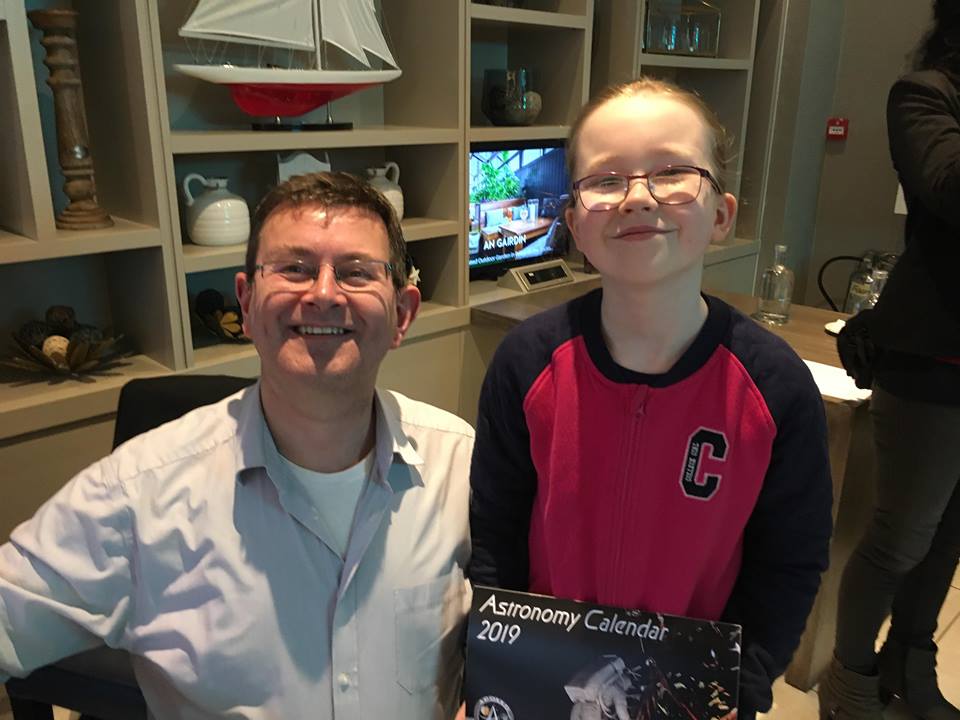 Then we went in to the first talk. This was on

by Aaron Golden. This was about could there be life on exoplanets? He mentioned Europa might have life on it as it has a magnetic field? He also mentioned Proxima B as well (please read my blog Life in Space?). 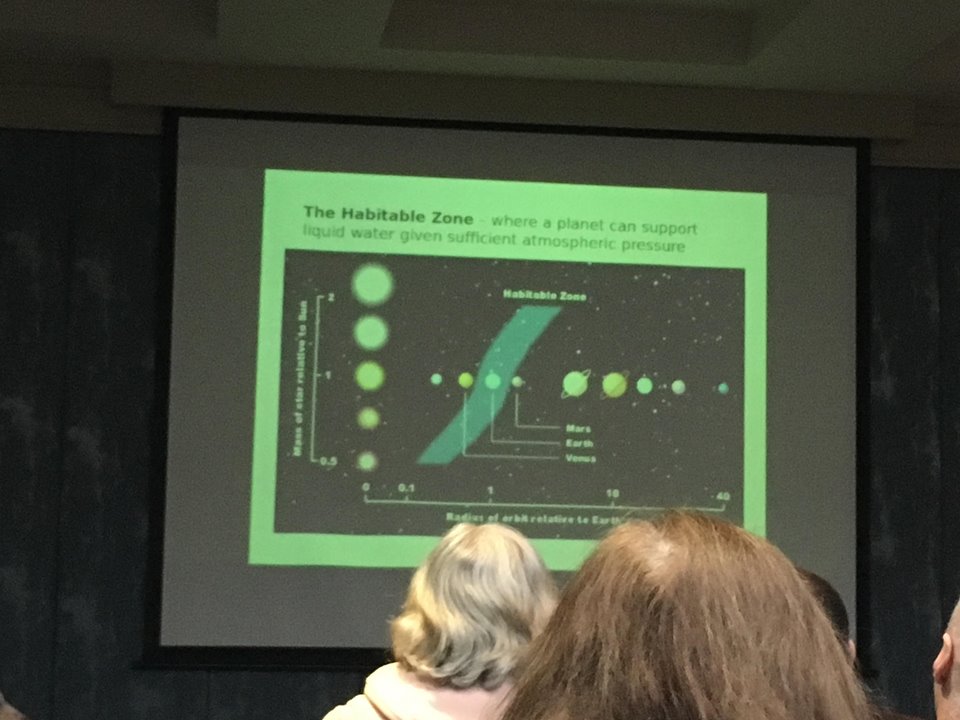 After that we watched The Star that Changed the Universe by Tony O Hanlon. This was about Edwin Hubbles life and work. He made a very early and important discovery about nova and variables. I didn’t really follow it but what I did understand was that he worked all the way up to shortly before his death trying to understand M31 in Andromeda as much as possible. Please read the link above from Wikipedia to learn more.
Next was Comet Debris and Irish Tree’s – What’s the connection? by Mike Baille. That was about different events happening at the same time period and trying to figure out the cause and is it a coincidence? It was fascinating this talk! He suggested that everyone should read “Rain of Iron and Ice“. This is about asteroids, meteors and meteorites and how impacts are likely to keep on hitting the Earth and what may come from it. He did a lot of research checking the bible, Mayan calendar and well known scholars text and cross referencing them to massive planet wide events that affected tree and plant growth. These planet wide changes were most likely (going by descriptions) as meteor showers, comets hitting the Earth or volcanoes! These all affected the trees growth and meant that they stopped growing as well for that duration.
Then it was Gravitational Waves- A New Window on the Universe by Morgan Fraser. This one was about gravitational waves, how they were discovered and where they came from. Morgan then mentioned about merging black holes and/or neutron stars and ripples in space time! I must look up this group as Morgan said he was in an American group called PESSTO as well. He was really good at explaining it! 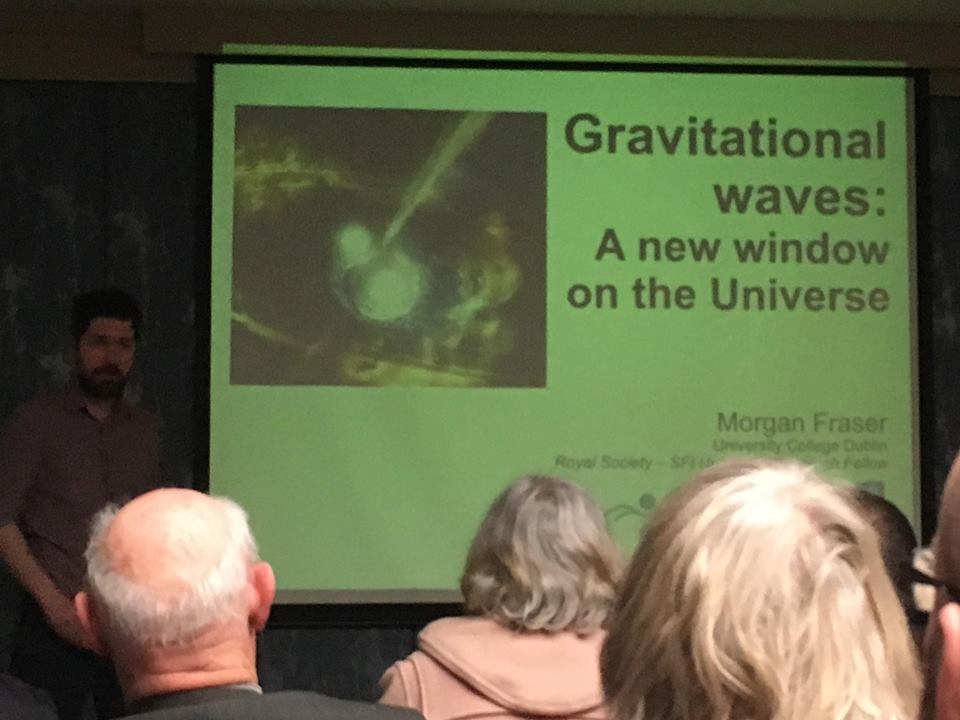 Finally there was The Sun Earth Connection by Dr Sophie Murray. This was all about space weather and its affects on Earth. She talked about geomagnetic storms and how they are detected and she mentioned that some of her friends were involved in the Parker Solar Probe project last year. Dr Murray showed a few videos on how solar flares happen and look when they are being measured – please check this link to see them for yourself. They used to be detected by SOHO but now should be monitored by the Parker Solar Probe instead.
There was a really big solar event called the Carrington Event in 1859 that had a big impact on the then “wireless”. Because of this event people started to understand how the Sun would have an impact on things on this planet and now very large companies make sure they monitor Sun Spots and Flares as they can affect power stations, flights and of course the International Space Station.
Our planet protects us from a lot of the radiation from the Sun because of our magnetic poles. These poles divert a lot of the radiation and molecules and convert it into the Aurora Borealis. Those really pretty dancing lights you see in the sky in certain parts of the world. You can check for yourself up-to-date solar activity at www.solarmonitor.org 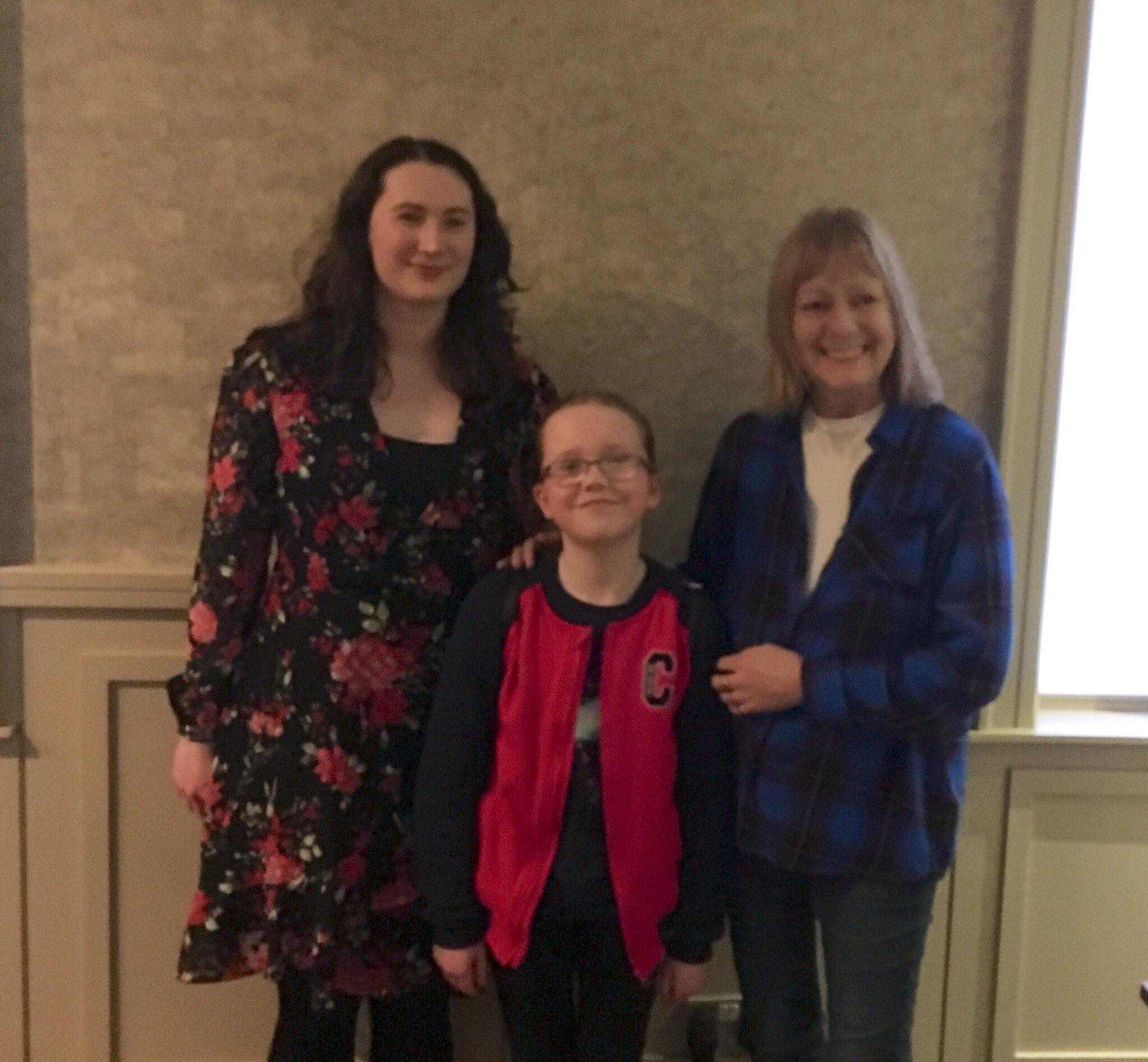 It was great that I bumped into Ann Dunne from Astronomy Ireland who gave me my interview last month too!
After that was a raffle [sadly we didn’t win anything] and after that there was a dinner and a table quiz [we didn’t stay that long though].
All in all it was a brilliant, educational event that I would love to go back to next year. I found the talks really interesting and good fun. The people there were very welcoming and I would reommend any newcomer to astronomy to this event!
Let me know if you have been to this event in the past and what you thought of it?