My journey to the Jet Propulsion Laboratory in Pasadena started in April 2018 when I had a Skype chat with Jordan Evans the Deputy Director for Engineering and Science. My Mum met him when he spoke at Dublin Tech Summit the same month. She managed to drop into the conversation that I had started this blog and he said he wanted to speak with me. The rest I guess is history. 🙂

Here is a little bit of my conversation with Jordan earlier this year. It was shortly after this that he asked me if I would like to come over to JPL to have a tour and fortunately my Mum said yes!

Today we set off early from the house we were renting in San Diego to get to Pasedena for 11:30am. Jordan had arranged badges for us and parking spaces, so we just drove up to the gate and found our space pretty quickly.

We were given our badges and then Jordan showed up straight after to meet us at the entrance. After a quick intro with each other we started straight into the tour! Jordan had a lot to show us but one of the first places we visited was the von Karman Visitor Center. Professor von Karman is the “Father of Aeronautical Science” and he is the Co-founder of GALCIT Rocket Research Project and Jet Propulsion Laboratory (JPL) too so a very important person!

He told us that this facility was sometimes inside the campus and other times outside depending on the time of year. When we arrived, it was inside the campus, so no outside visitors and whilst we were there, we were the only people in it!  The first thing Jordan showed us was the Explorer 1 mock up: 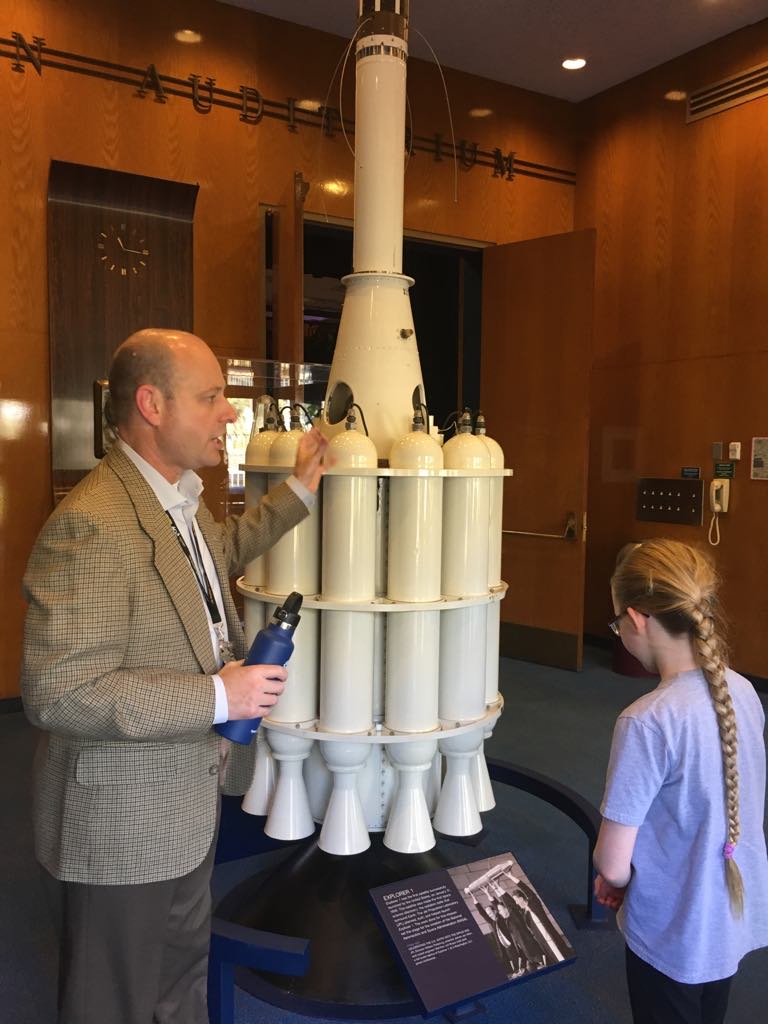 This launch was the very first mission to space for the US and JPL. He said that technology had changed a lot since this launch and we wouldn’t recognise the old shape of a rocket, (true – I didn’t!). This model shows the cosmic ray counter that was onboard. It was this mission that discovered (what they suspected) was radiation belts were around Earth. 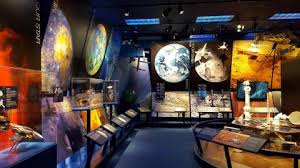 This photo shows the first large room in the centre and has images of each mission to each planet in our Solar System. Jordan said that JPL was 82 years old this Halloween, so they are even older than NASA who were 60 last month!

There is so much to show you from inside this room but I couldn’t just make my blog about it all, but I will tell you some of my favourite parts:

These are 2 things brought back from the Moon on display, please see below: 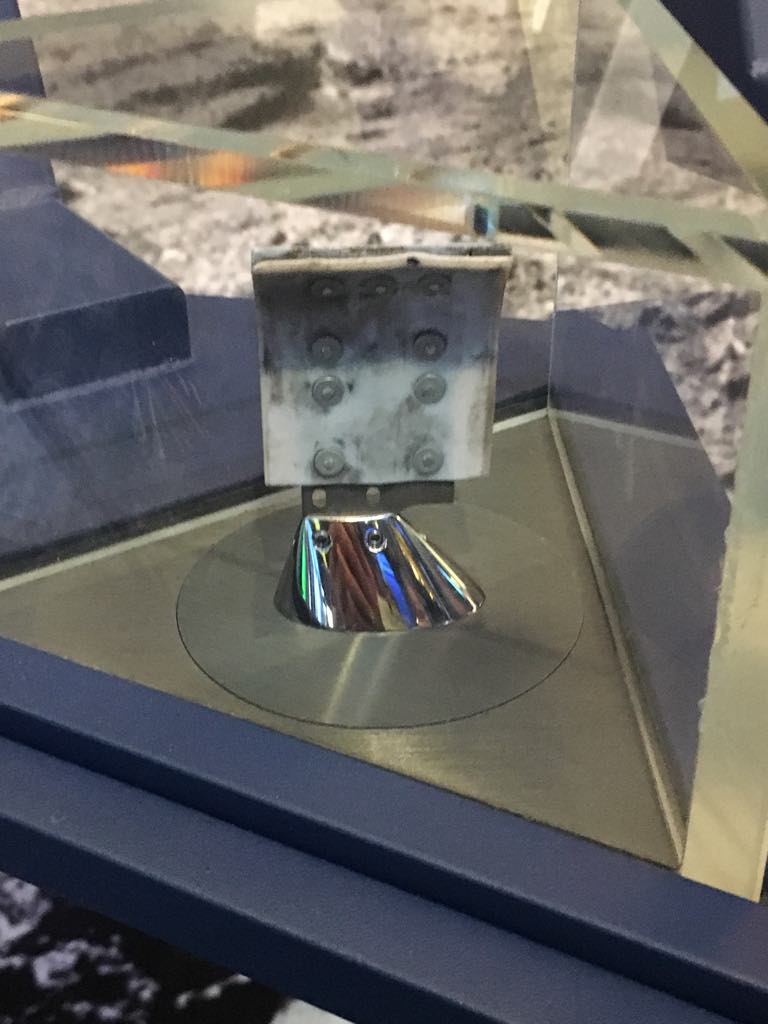 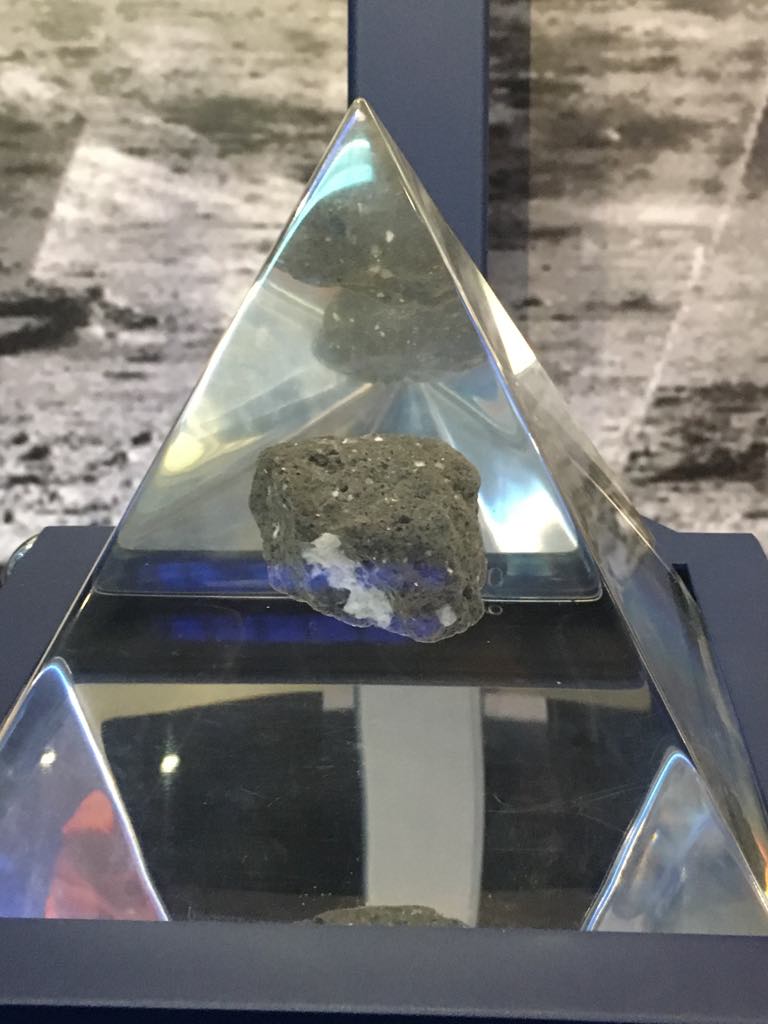 Then we saw this amazing foggy, coloured block called Aerogel. This is a silicon-based solid that is 99.8% air. It is used on Star Dust to trap fast moving particles and also insulates the electronics on Mars Rovers. 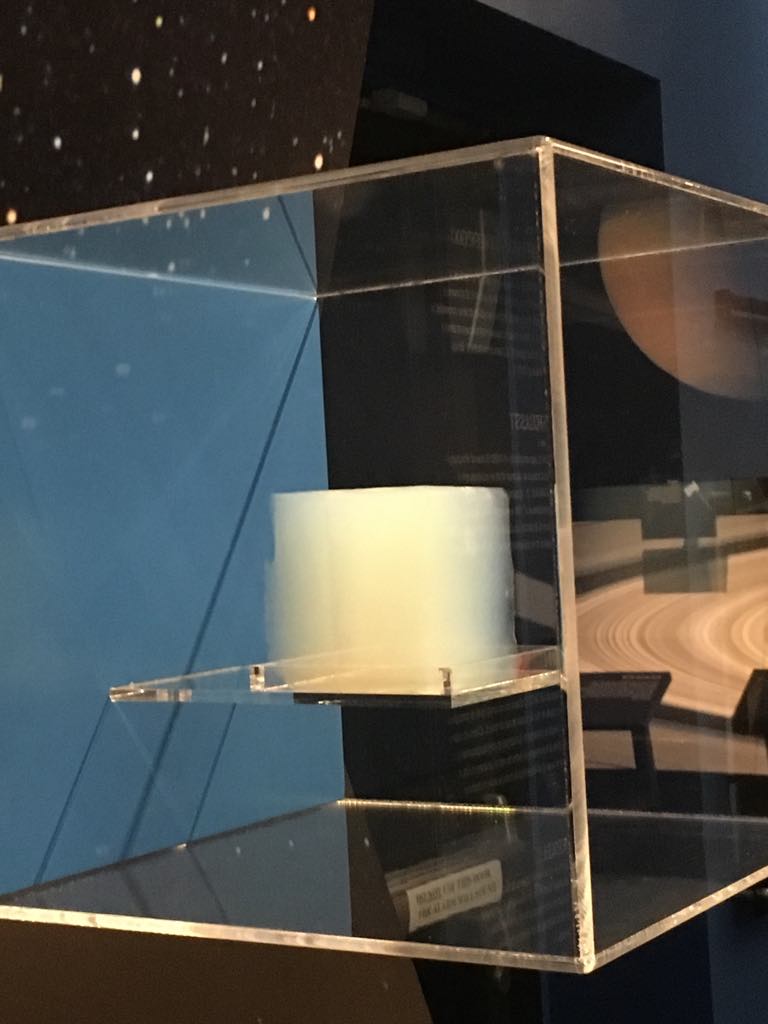 We were then shown this video that Jordan spoke through with us on how to fly to and land on Mars. Have a listen:

There was still so much more to mention but we did tour the whole facility so will stop there for now and perhaps mention the other things I saw and learned another time!We then went outside again and through to another building on the other side of a square. Inside this building was a model of what data looks like going to and from Earth to satellites and right next to it was this life sized model of the Mars Curiosity Rover 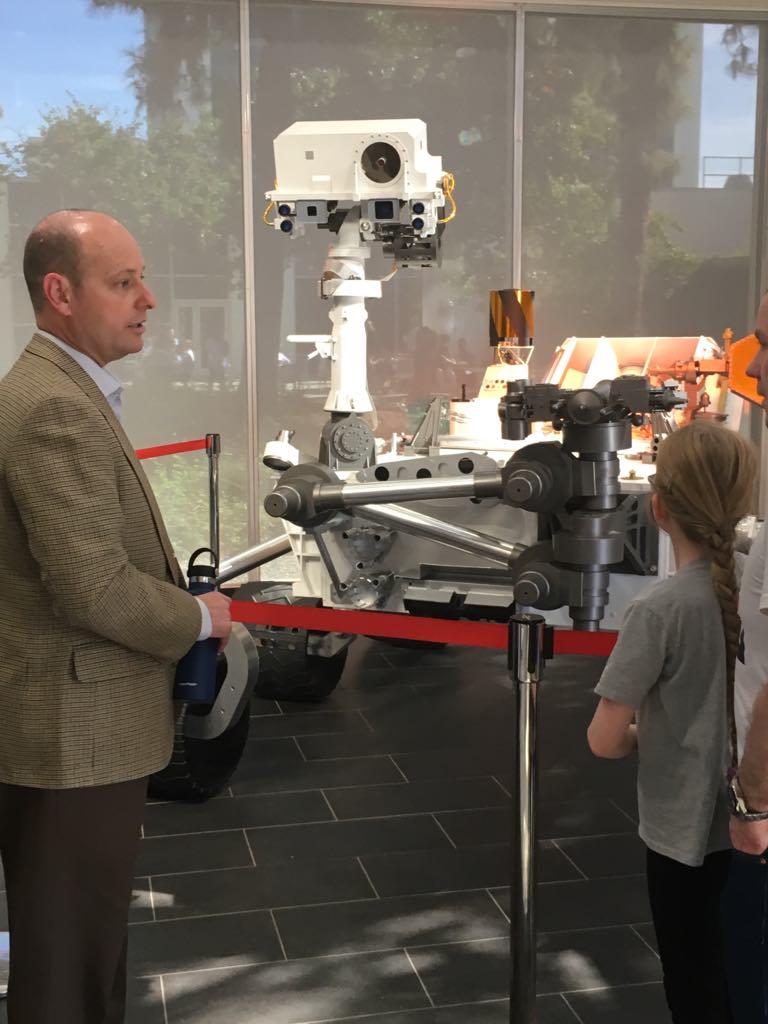 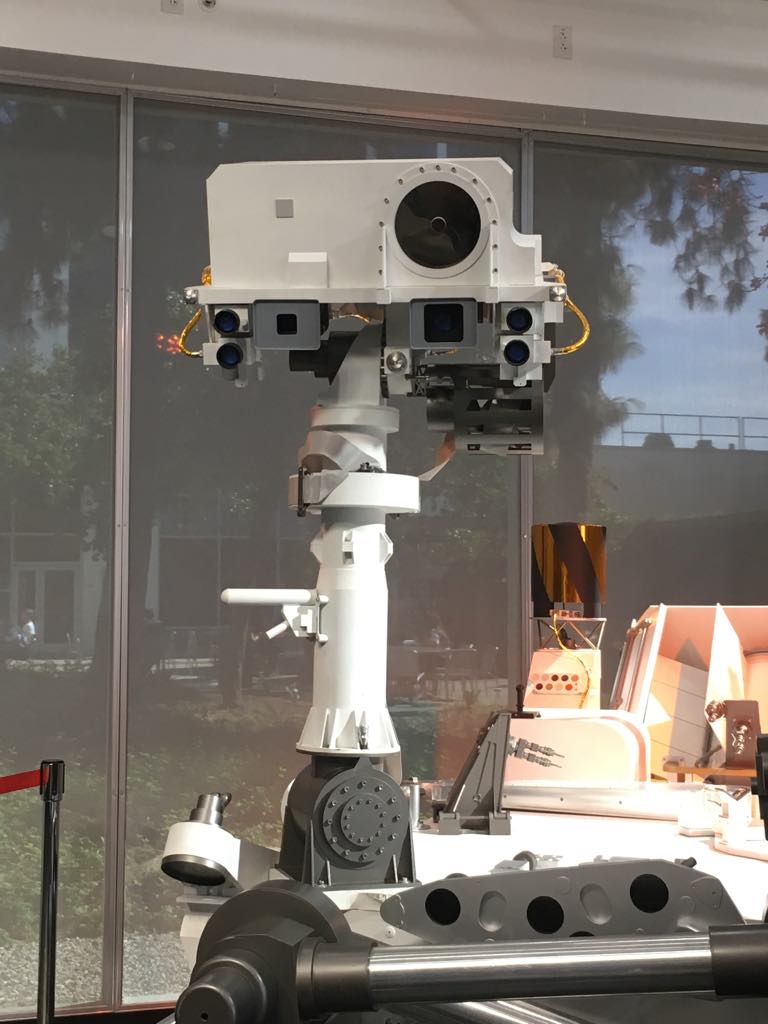 In the first picture you can see quite clearly the robotic arm and its shoulder and elbow all bent up and put away. In the second photo you can see the main camera in the top of the screen and then it has navigation cameras on either side of it.

We also found out that the Rover can fire a laser from its main, big camera and it breaks up rocks and then tests the composition of the fragments. If they are suitable it then goes on to collect samples.

Then we moved onto the Space Flight Operations Facility. This has been the base of operations for all flights to space and experiments since 1961. It became a US Historical Landmark in 1985.

All data from every experiment, satellite, and mission “that are beyond Earth orbit” come through this facility and it has become known as the “Centre of the Universe” for this reason.  So this plaque is placed in the centre of the Command room. This facility is where spacecraft tracking and scientific data are received and processed from the JPL’s Deep Space Network. There are other antennas on Earth to get data from Earth orbiting spacecraft. 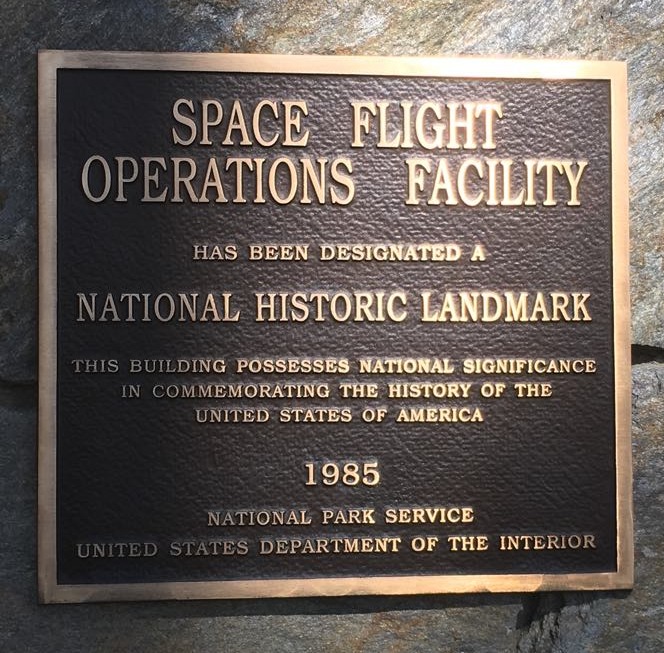 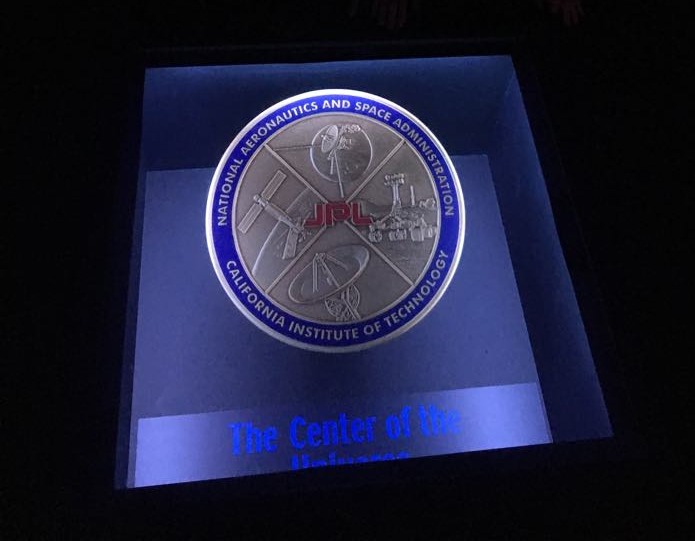 Here is a short video of the Command Centre with Jordan talking about the upcoming mission called Insight which should be arriving at Mars on the 26th of November.  The Command rooms are all prepared already for the team to watch its arrival and hopeful successful landing on the planet! 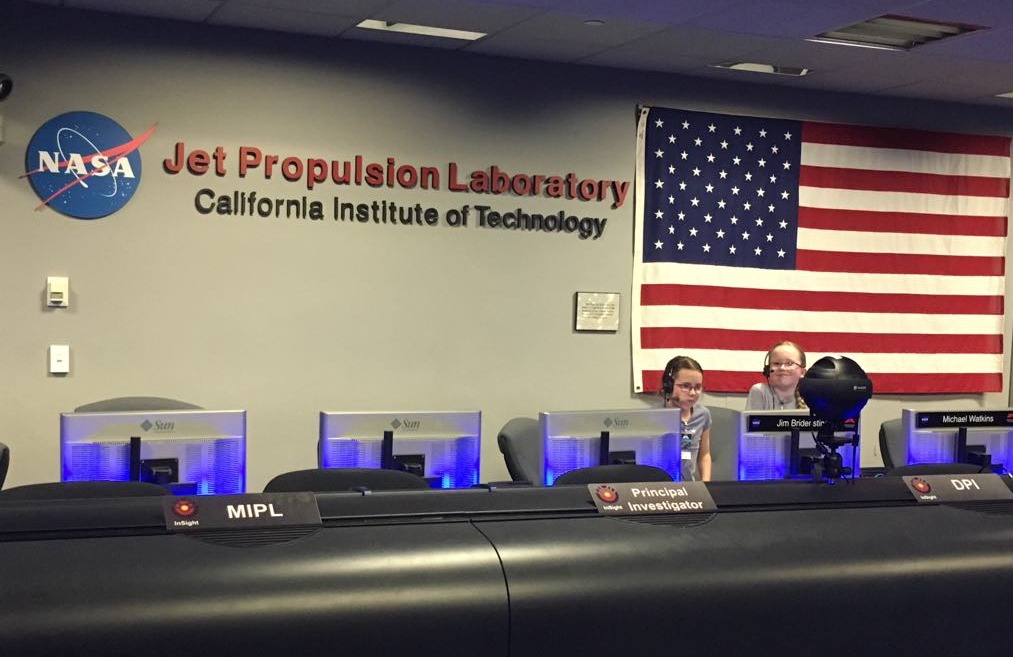 As you can see above, there are name labels of where each person will be sitting on the day it arrives. I also need to tell you a story about Peanuts!

Weird as it may seem, JPL and NASA owe their succesful Ranger 7 mission to peanuts. It was apparently the only thing they did differently to the other missions and since then they pass around the ‘lucky peanuts‘ as a tradition an hour before each important part of a mission. 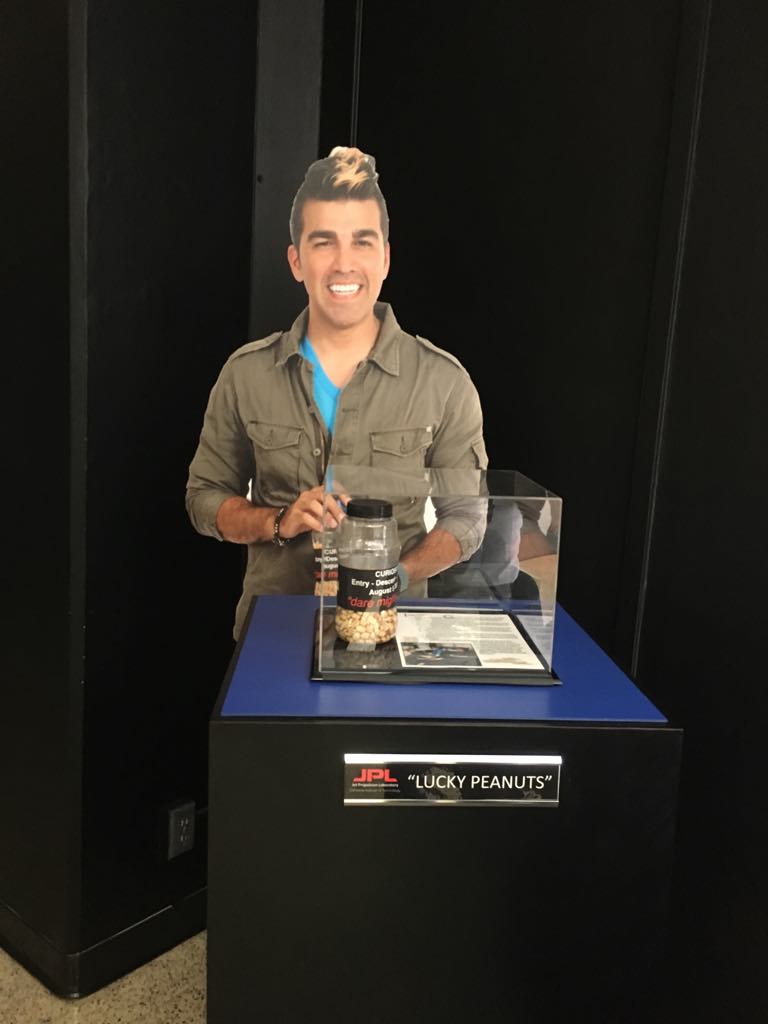 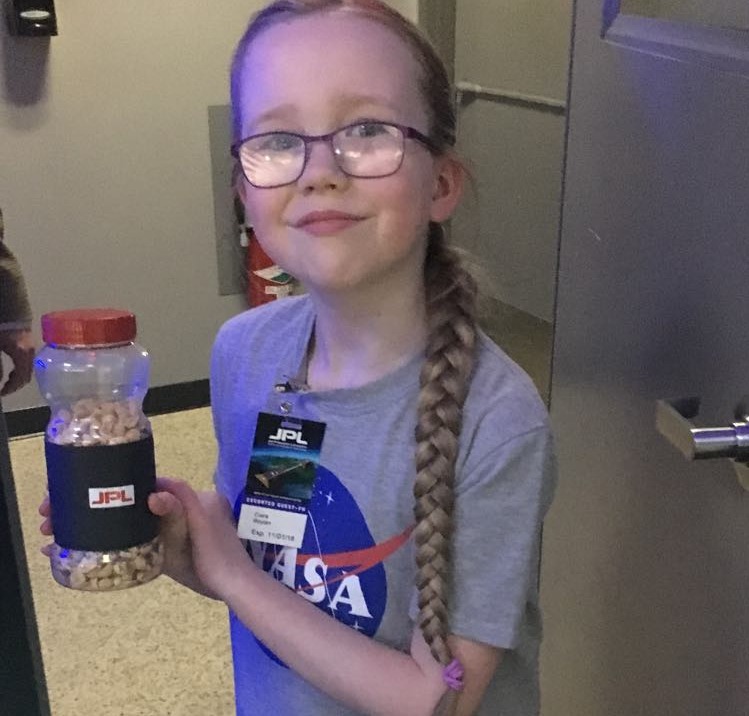 Next we moved on to the Mars Yard, the mobility and robotics section. This is kept as a trial area for all robotics features. The video below is of “Scarecrow” he is a robot without a brain. It is a scaled down version that is much lighter in weight as we have greater gravity here.

Scarecrow was made before Curiosity to predict how Curiosity would move in certain circumstances. For example, how would Curiosity’s wheels move if it went over a large rock? Can you see how slowly it moves? All the instructions are sent each day and Curiosity would perform its tasks and report back at the end of the day to Earth operations 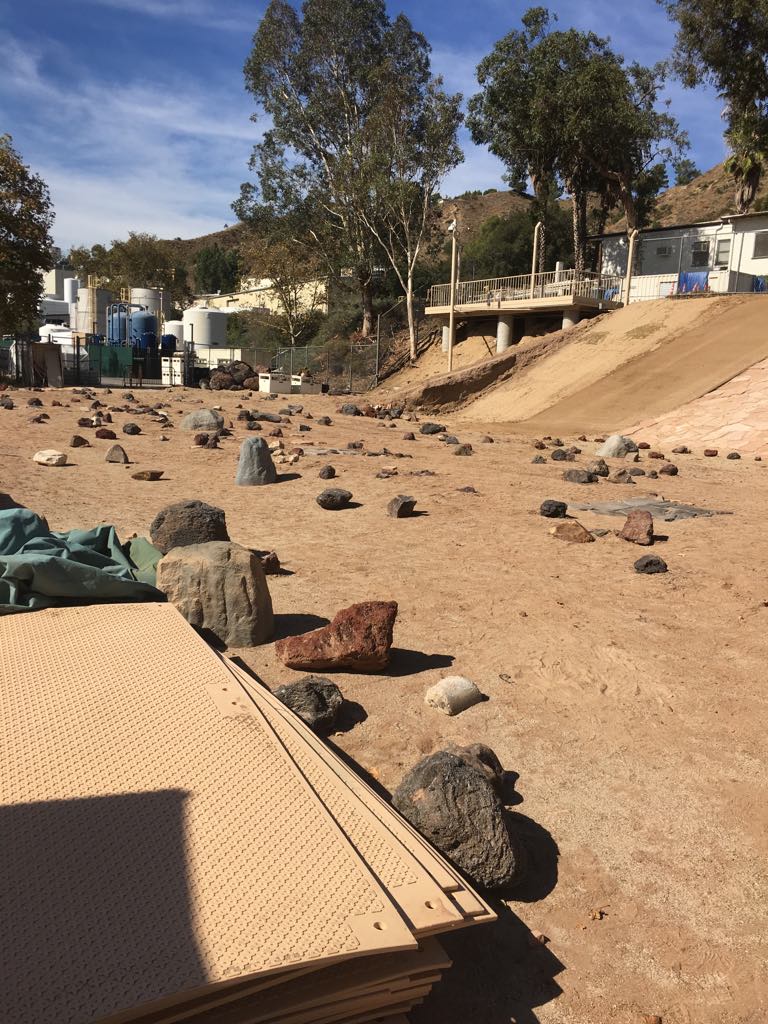 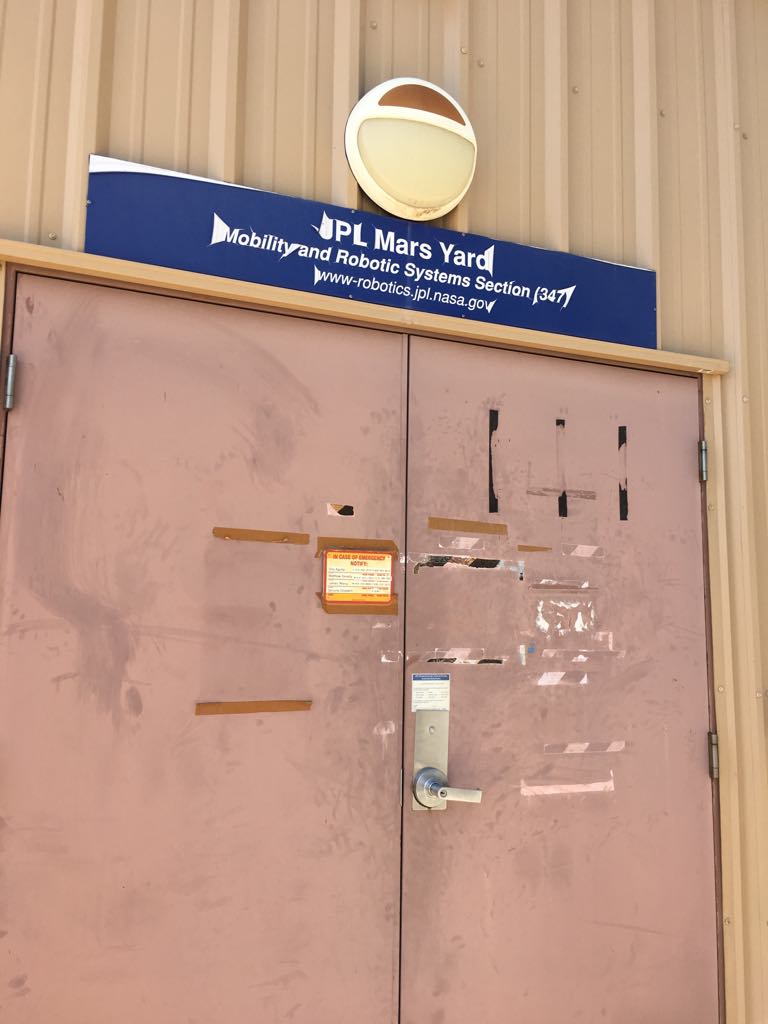 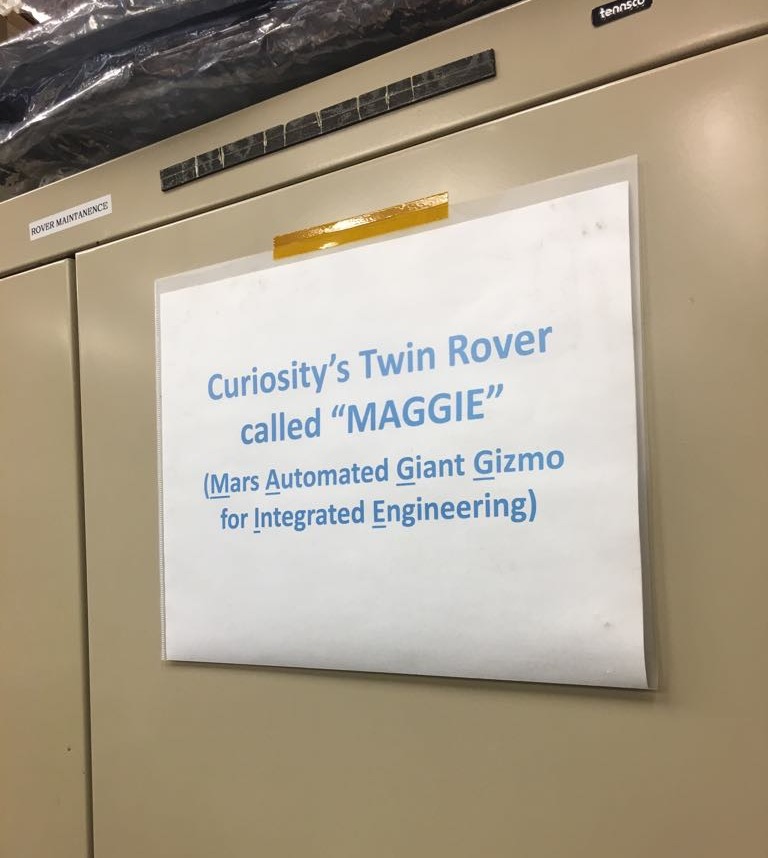 This is the Mars Yard in the first picture and behind the door of the second picture is MAGGIE. She is the Earthbound version of the Rover on Mars. When we were looking at it my Mum said it reminded her of the Apollo 13 film where they mimicked how to fix problems in the space craft by having a copy of it on Earth and Jordan said that is exactly why they have this.

When Jordan was in Dublin earlier on this year at the Dublin Tech Summit, he mentioned a story on stage about Morse Code and Tyres and I asked him about this whilst we were there. The story goes JPL put the letters “JPL” on the tyres but NASA didn’t approve of this. So JPL sneakily wrote “JPL” in morse code on the wheels instead and didn’t tell anyone about it until the rover was on the launchpad. Since they didn’t have any other tyres that didn’t have JPL in morse code on them and no time to make more, they decided to leave it be. 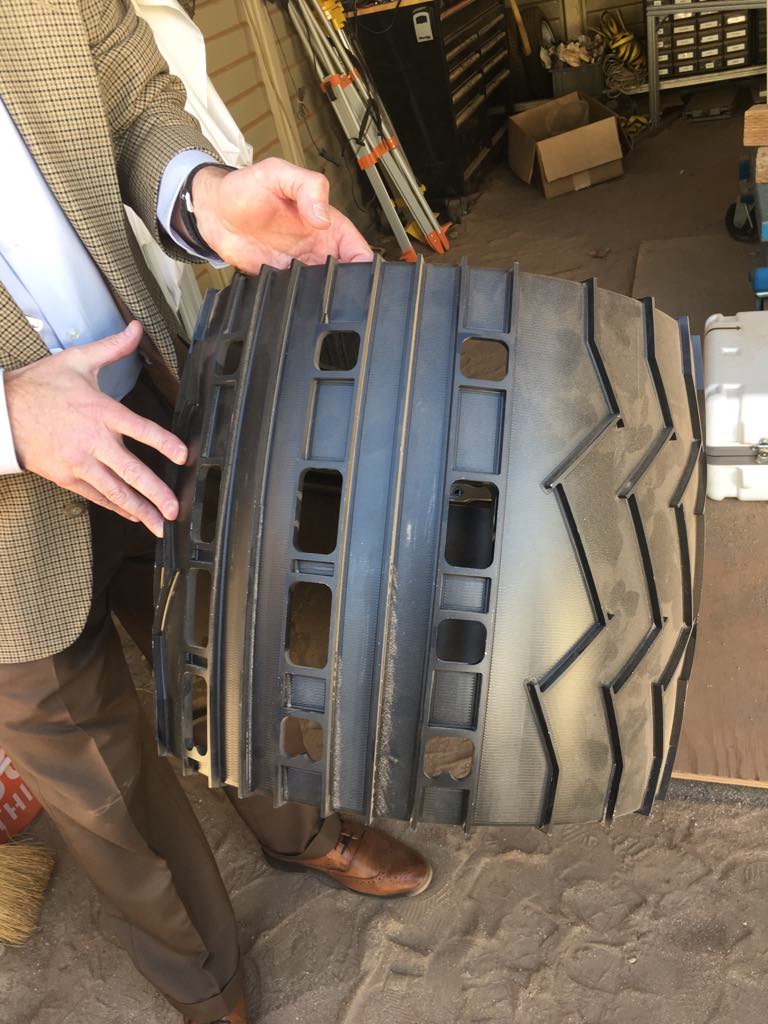 We finally went to the Spacecraft Assembly Room. This is where we see the Mars 2020 mission starting to be assembled. This room has been home to many missions over the years. In the background you can see all the mission badges. The team in here are all wearing overalls as this is a clean room. This was to ensure that no microbes or contaminents are taken into space.

There is a mannequin called “Bob” who is always dressed in the current format of clothing so that visitors can see even when the assembly team aren’t there how they’re dressed. Please check the images below: 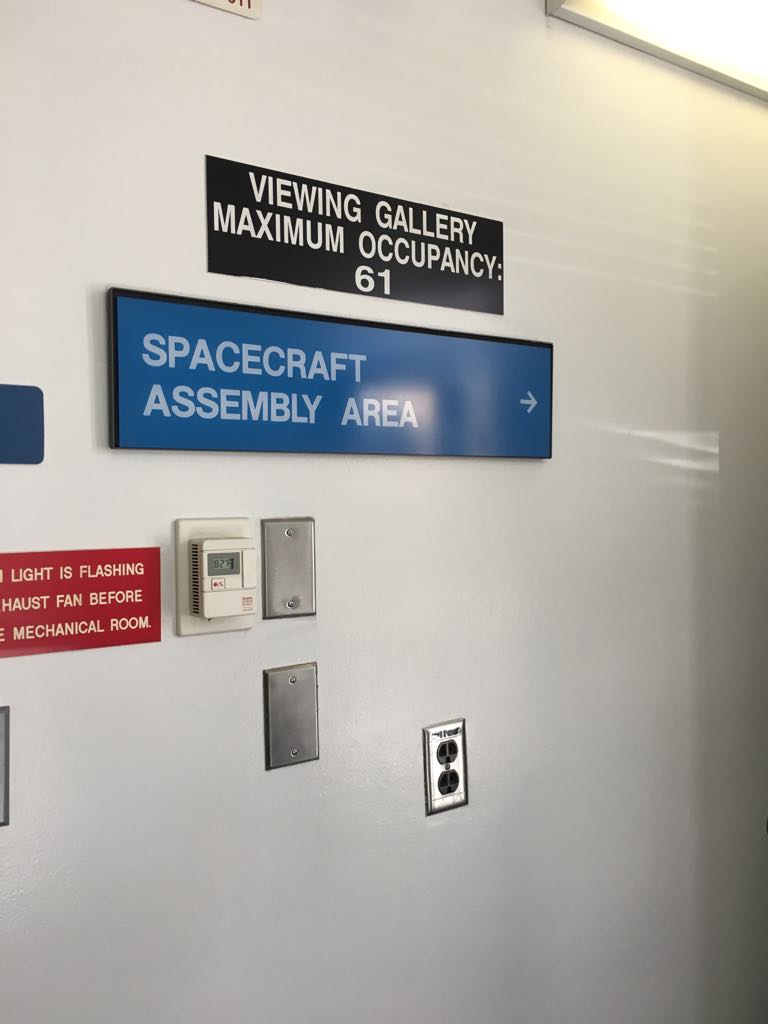 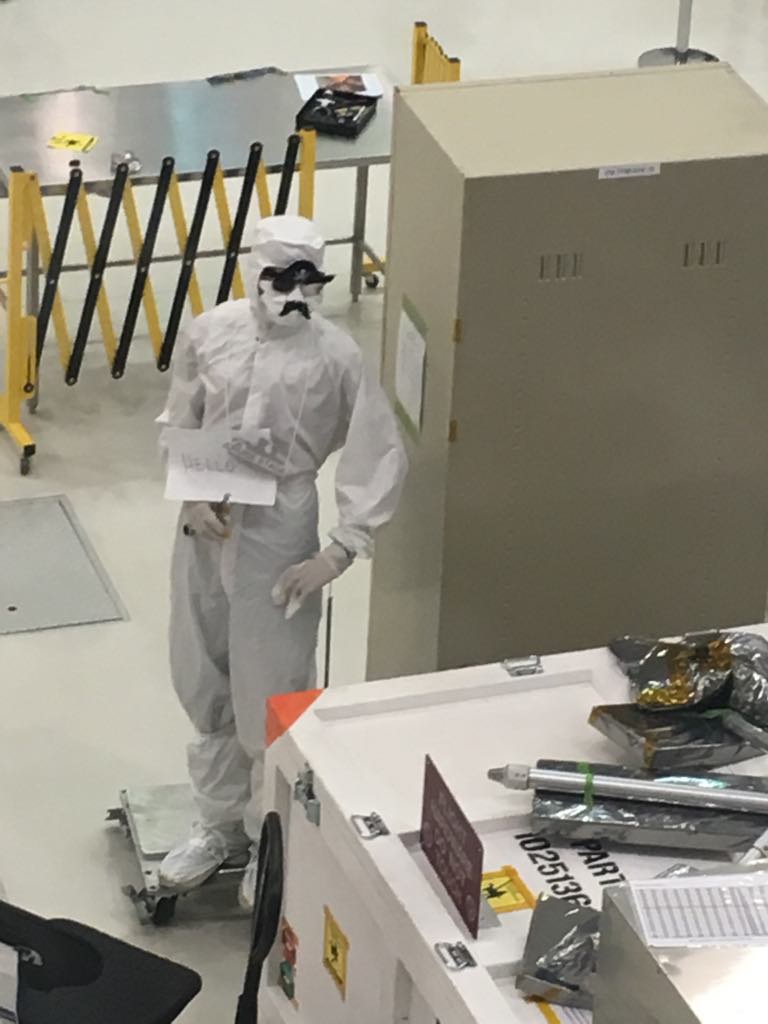 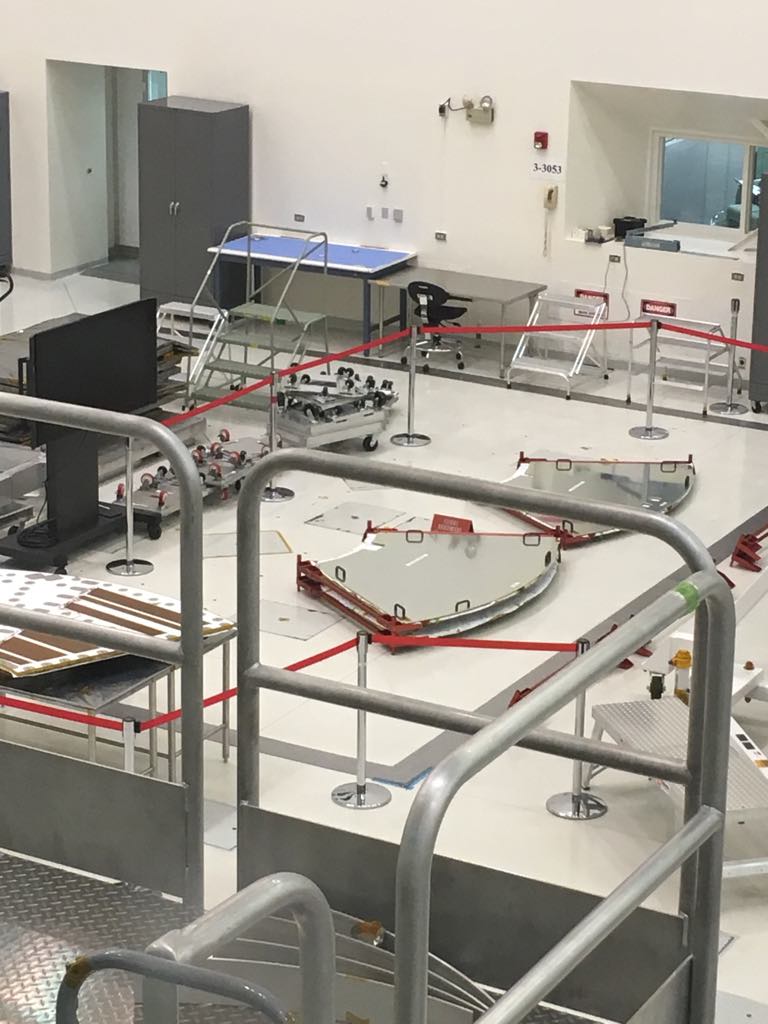 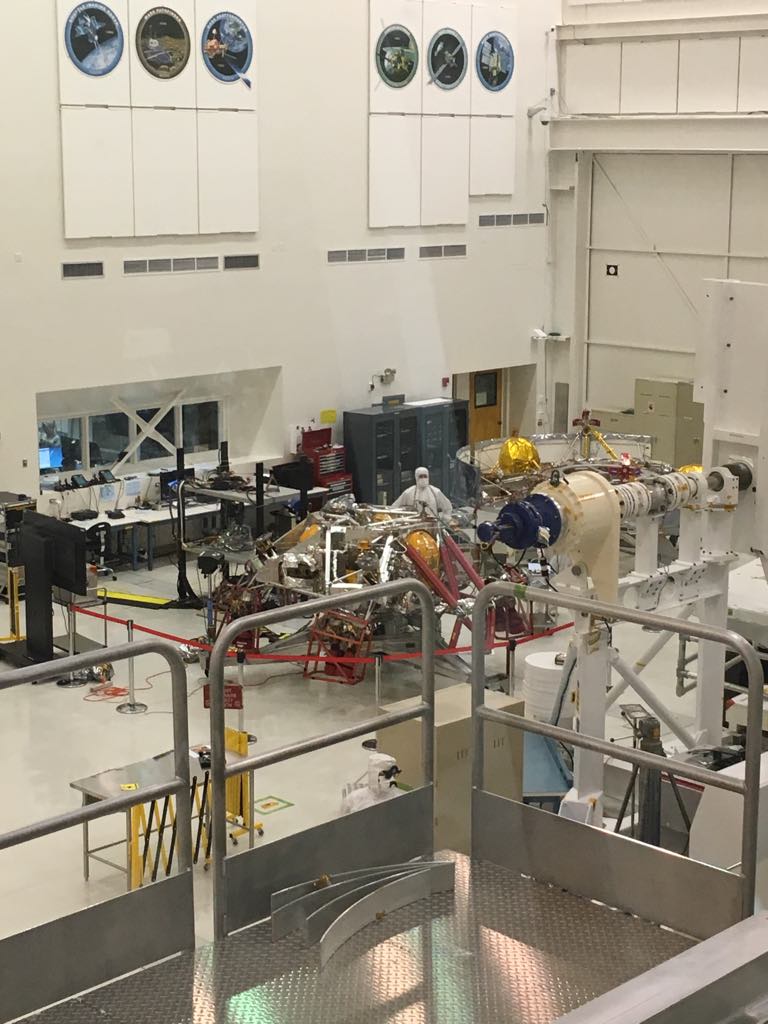 The whole tour took 2 and a half hours and I haven’t put every picture up as this blog is already really long! But over the next few weeks I will put up more pictures of other things we saw and learned so please do come back to my social media pages to see them.

If you have any questions regarding this trip to JPL, please send me an email to hello@ciarasjourney.com and I will tell you what I can. Thank you for reading and please tell your friends to subscribe!

Jordan Evans and me at the end of the tour