This week I went to my very first #InspireFest at the Bord Gais Energy Theatre. We had a 5:30am start to get up to Dublin in time for Registration of 7am.  My Mum and I were the very first attendees into registration and got our badges and lanyards and we started looking around because the talks weren’t going to start for another half an hour, forty minutes.

First thing we saw was a very large flower display called #GrowingConversations. It was all about mental health and it was part of the Aware Campaign to get people talking. They are trying to promote an event happening at this years Bloom in the Park as well.  You were asked to put in one of four colours of flowers depending on your mood into the display. Yellow meant Happy or Content, Red meant Anxious or Tense, Purple meant Strong or Confident and Blue meant Low or Sad. 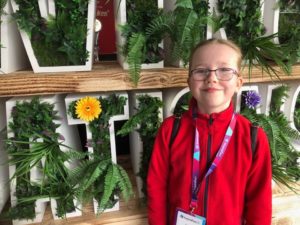 My Mum and I put in Yellow flowers because as I said “I’m happy that we’re finally here!” Our flowers were actually the first ones put in of the many.

We had a short look at a few of the sponsors stands, but it was time to take our seats to see some talks.

First the RTE Cor Linn Choir performed with their amazing performance of The Cranberries song Dreams.

As @AnnODeaSR kicks off the 5th #inspirefest, we’re treated to a beautiful rendition of @The_Cranberries ‘Dreams’ – a fitting bit of inspiration to celebrate five years of Inspirefest! pic.twitter.com/2IVoMEjytl

Next we saw the talk ‘Drawing Disruption’ by Liza Donelly who showed us several cartoons and told us stories that happened to some cartoonists. Check out the pictures from Twitter and videos of her drawings.

Then we saw ‘Making Communications More Human’ by Stuart Templeton.  It was a talk about how quickly people take up technology over the years.  I can’t believe it took people 25 years to adopt the fridge into their home!  I guess it was the cost initially but even still….

Then we saw the ‘Next Generation’ section of the show where two winners of BT Young Scientist, one the winner of Best Group Project, one the winner of the Solo Project, and they talked with Zainab Boladale a presenter of News2Day about them winning.  They said that nothing should stop you trying to achieve your dream, no matter the haters.  They said they have spent the last year just pushing themselves to get their projects done in time for the BT event and some people said there was no chance their project was going to work and yet they won! 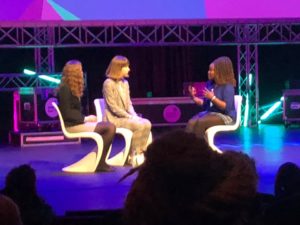 After that there was a VERY special guest. The Taoiseach!!!!, (Prime Minister for people not from Ireland) Leo Varadkar. He did a talk about wanting to make Ireland the Tech Capital of Europe and how much had changed in the 5 years since Inspire Fest had begun. 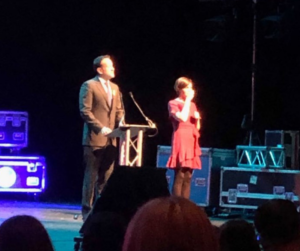 After that we had another section called ‘New Voices’ by Zile who runs Zile organics.   She said to always try to reach your dreams, no matter how high they are.

Then up was Joanne O’Riordan an amazing lady who has overcome so much to now become an amazing sports news caster.  She made the whole crowd laugh a lot and also put out a challenge in the form a Mini Hackathon that sounded really interesting.  She had a few issues that she wanted 20 odd people from the attendees to look into with the Solvers team.  I asked my Mum if we could take part and we signed up during the first break shortly afterwards.

The always inspiring Joanne O'Riordan ' I hate the word disability, I only see ability' talks to attendees on the future of smart living technology to assist with inclusivity, to combat loneliness or and people living with assistance needs #inspirefest19 #inspirefest pic.twitter.com/FLq27XZ6CN

Then there was a coffee break where my Mum and I walked around checking other stands.

We walked upstairs saw a DCU stand about clean water and a machine they made from scratch to see whether a sample of water is clean enough to drink or not. Ruth Clinton told me and my Mum all about it. It’s called EcoliSense and it’s the first of its kind created! 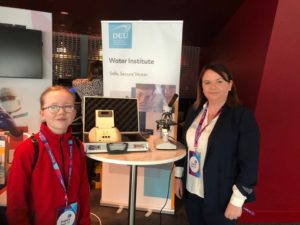 We also saw a stand called Dublin Airport Future Factory where they were looking for ideas to help solo travellers, you know, making things easier for them, be it getting to the gate, things to amuse themselves, etc, etc.

Laurent de Saint Sernin, Nicole Owens, Dr Lee Motherway and Elaine Burke got up and had a chat about ‘Mental Health Literacy’.

We listened to the talk about going ‘Towards a World Without Disease’, Cat Oyler talked about how to make a disease free world by comparing ourselves to cars and saying that sometimes our cars have better care than ourselves.

Then Simone George and Mark Pollock told us about their own personal experiences in ‘Towards a World Without Paralysis’. Those both were very eye opening, they really were. 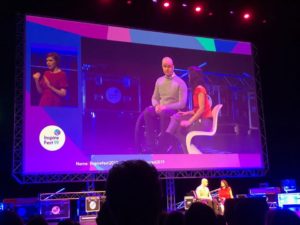 After that we had lunch and went to a Breakout Session ‘ Mini Hack Access with Solvers’ where we had to come up to a solution to a problem.  I was put in a team with my Mum, Peter Pudiate, Caroline Cunningham and Ricardo Murillo. Our problem was, disabled people have to currently give a train station 24 hour notice before they go. We had to find a way to decrease or get rid of this early warning crisis. To do this we bounced several ideas between us before getting ideas put into place. We came up with a few versions of the same idea but we finally decided on one.

We were given templates to use to create personas, to “steal” ideas currently in use and to build a timeline for the solution.  It was all really helpful.  I was thrilled that they all let me have my chance to offer my ideas and even kept mine and included some.  It was a lot of fun!

When we returned from lunch and this Hackathon, we stepped back into the main room again to hear Ciara-Beth Griffith.  Her talk was about her designing apps for autistic people and how one message changed how she thought about her apps and the way she designed them in ‘Product Design for Autistic People’.

Attending this years #InspireFest was amazing, really inspirational, and totally worth going. I’m definitely going again next year if I can. You guys should definitely go and feel free to look up anyone I’ve mentioned.

Below is the floral display I first put my flower into.  It looks great doesn’t it? 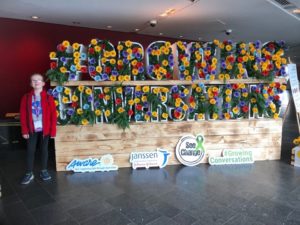 P.S. Remember the Mini Hackathon thing I talked about? Caroline represented our team and told everyone about it and we won!!! It now has a very big chance of actually being made! Keep you up to date about that, we are all meeting up again at the Dogpatch Labs on the 5th of June for Hack Access Dublin, its FREE.  Can’t wait to see everyone.  Please join us!

And the winner is @artofsinging’s team with their idea “Navigational Platforms”
Congratulations ✨
Well done and thanks everyone @InspirefestHQ @weare_solvers 🙌
See you on 5th June @dogpatchlabs then 😇 pic.twitter.com/6DcrziRuEj