Behind the Scenes at Armagh Planetarium

Since I started writing about my journey in April this year (2018), I have been given a lot of new opportunities. Last month I was sharing my first article about my then latest trip to Armagh Planetarium and the Director of Operations Sinead Mackle read it and contacted me via Twitter!

She said that she was so pleased to hear my journey about space and science began at their Planetarium that they wanted to give me the chance to meet the people behind the scenes. Well yesterday I took them up on their offer and I spent the afternoon looking behind doors, speaking to people we normally don’t get to meet!

My Mum and I met up with Heather from the Education Team yesterday and she was brilliant in getting us around the whole facility and introduced me to so many people too. As part of my visit, my Mum and I were invited into their latest show “We are Aliens”. Another fantastic journey through space learning about our place in space and how life could be as small as a microbe on other planets:

However, after the show finished she took us back inside and showed us the special technology they use to make the show possible. There is a computer that they programme with all the shows throughout the year and they select the ones they need depending on the time of year and the audience. The Little Yellow Star was the first show that I saw when I was little 🙂

Heather explained to me just how important this Planetarium is to Armagh Observatory. She said it was 95% important to them, as it was a great attraction to bring people to the place in the first place and made explaining about space so much easier to all levels of ability. However, funding a machine like this wasn’t cheap! She said it would cost €300,000 to buy a new one so it’s a very expensive thing to look after! I also found out that this is one of the oldest domes in the UK. 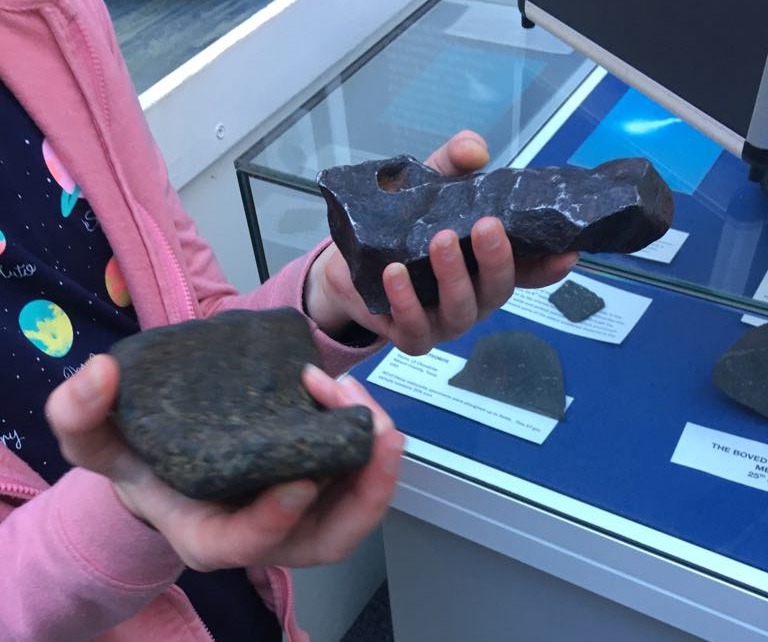 We then left the dome and started walking through the exhibits and ended up looking at the meteorites section. Heather showed us two small rocks one a normal earth rock, one a meteorite that fell in Ireland. She then put both rocks into my hands and on one side my hand practically fell to the ground! That’s how heavy the meteorite was!

This rock was very dense with iron and nickel. She then showed us another small rock that had an interesting story. 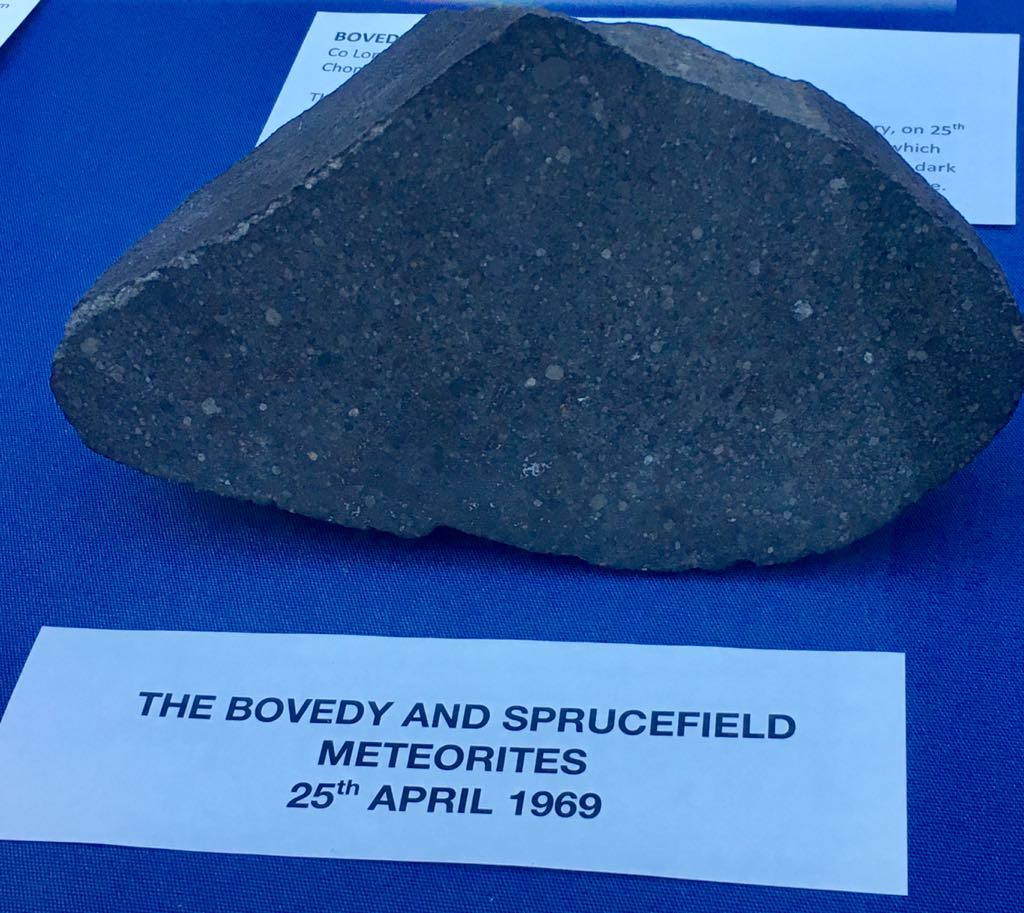 This rock landed at a police station in a desk! The other half landed in a field. Thankfully no one was hurt but it did cause quite a bit of damage. It will be 50 years next year, so the Planetarium will do an exhibit of this fully next year. It should be interesting to come back and see it next year and learn the full story.I also got the chance to hold a Tektite. This was very light and smooth to the touch and looked like really dark glass.

If you get chance to view this exhibit it goes into great detail and you also get to touch a really large meteorite! The only reason why this large meteorite is so dark is because it got burnt coming through the atmosphere but if you look closely, you can see areas that have been frequently touched by people and now its starting to reveal the shiny surface underneath.

We then scooted round the rest of the exhibits and passed the Apollo images and information and headed outside. Heather walked us through the beautiful Astro Park. She says she likes to measure the steps between the planets and it gives you a real idea of just how far everything is from the Sun.

We talked a little about the BepiColumbo Mission that left recently to go to Mercury. It’s going to take 7 years to travel there for a mission that will only be a year long! 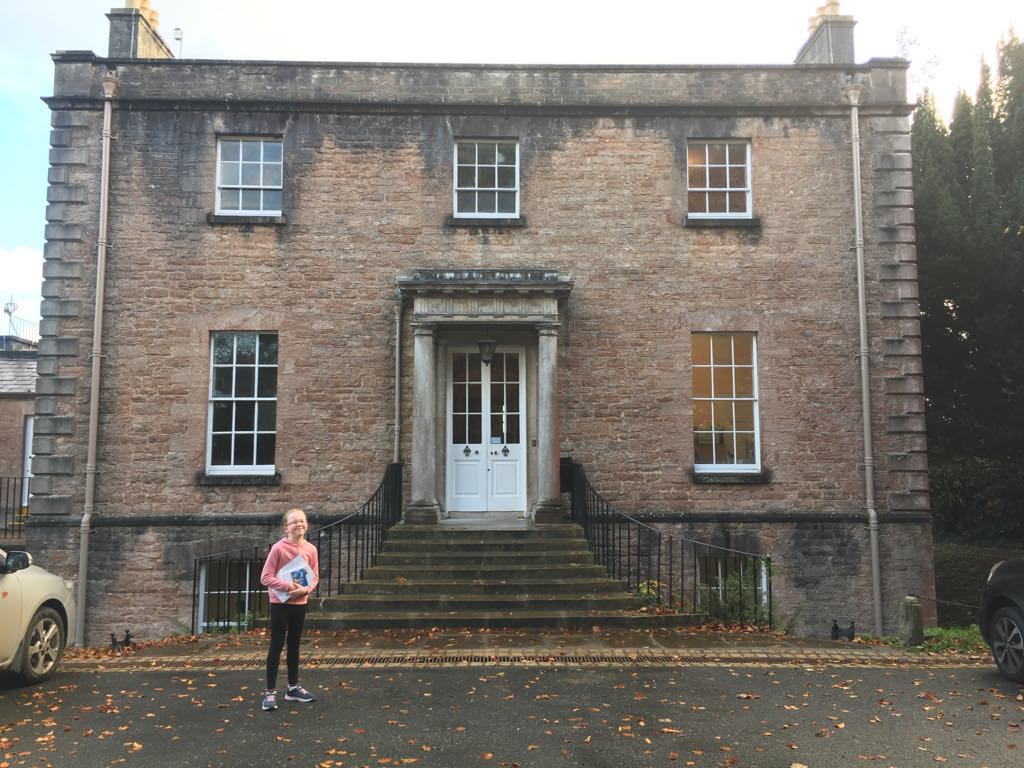 Heather then took us to a lovely purpose built building. This house has had families and astronomers stay for hundreds of years! The astronomers would stay there and do their research for months and sometimes years. The directors of the Planetarium would live there with their families as well.

A great thing we learned about the directors, is they would never retire. They all were either removed by a board or die in their role! One stayed in their job for 60 years so it was obviously a great job to have.

We met Michael Burton who is Director now and he said he was happy to see us there and hoped I would look for a job in the years to come with them! 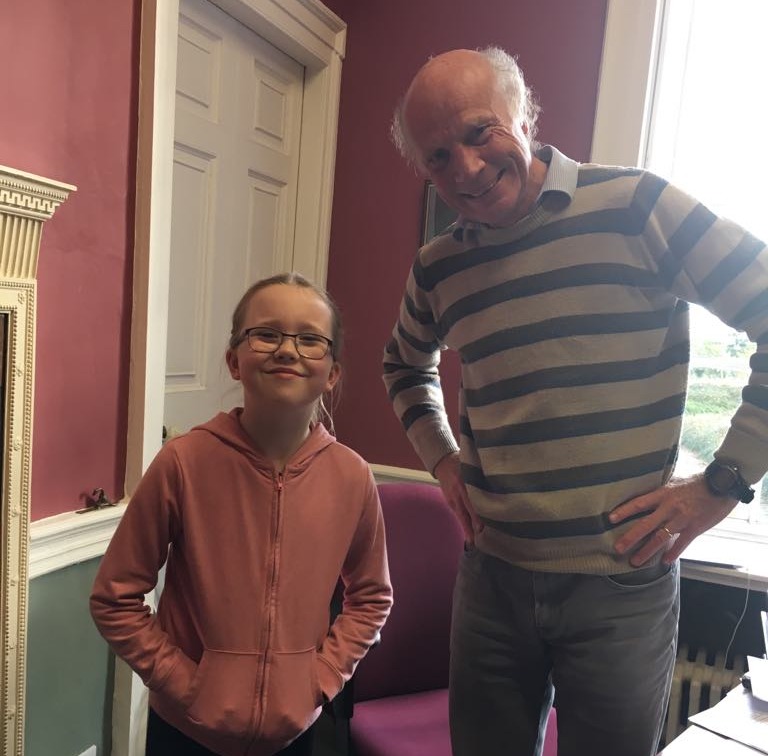 We then went on to meet some of the PhD Students. They do research in areas to do with Astrophysics, Solar Flares and many more!

I met one girl called Rachel who would do some observations on Sun Flares – she would look at the flares using different filters like UV, visible light and X ray among other things. I asked if it was the same sort of filters that we use on our Sky at Night app on a phone and she said it was.

Next I spoke to Tom who works on clouds like the Large and Small Megallanic Clouds and how they act, some shine light and some don’t. He wants to try and understand why they clump as well. He uses a computer programme to do it. It seemed very complicated but he hopes to have some answers next year (we shall go back and ask him next October!).

The last lady I spoke to was Erin. She works on very massive stars called O stars. She looks at stars that evolve through a whole lifetime. They start from a cloud and end at a Supernova. She can do the whole thing in a computer programme from start to finish in one minute! She can pick up brightness and colour through the research too.

We then visited another couple of astronomers and we watched meteorites being recorded (watch the video below) and also a physicist called Joric Vink who spoke to me about Black Holes.

Time was running out for our visit but Heather took us up to their telescope, up a staircase and through a small door. This was a very special treat as very few people get the chance to actually view this. It’s no longer in use but is kept in perfect condition. 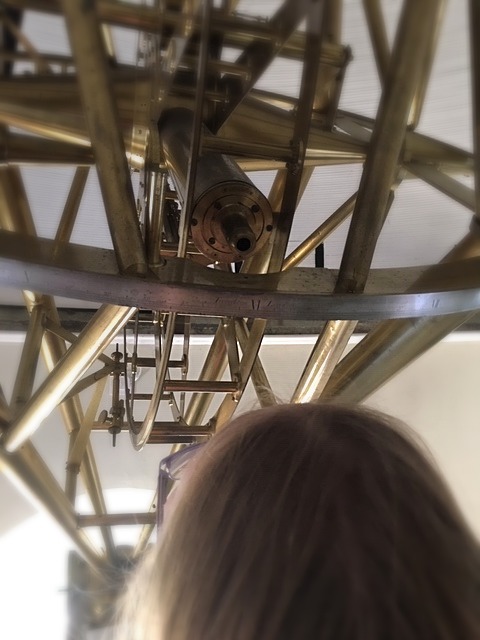 Thank you for treating me and my Mum like VIP’s for the afternoon and giving us a chance to see behind the scenes and meet the people who are making discoveries and telling the people who visit the Planetarium about how truly amazing Space really is.

I had great time and this has inspired me even more to work hard for what I want to do! If you get a chance to visit Armagh Planetarium after you have read this blog, then please tell them that Ciara’s Journey sent you!